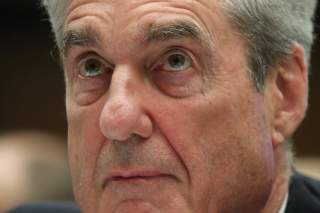 If Democrats believed that Robert Mueller would provide them with additional ammunition for an impeachment inquiry, they made an extraordinary miscalculation.

Not only was Mueller often flustered and unprepared to talk about his own report—we now have to wonder to what extent he was even involved in the day-to-day work of the investigation—but he was needlessly evasive. In the end, he seriously undermined the central case for impeachment of President Donald Trump.

The very first Republican to question him, House Judiciary Committee Ranking Member Rep. Doug Collins, forced Mueller to correct his own opening statement. In it, the former FBI director had asserted that the independent counsel “did not address collusion, which is not a legal term.”

Stressing the difference between the criminal conspiracy and the colloquial “collusion” is a popular way of obscuring the fact that the central conspiracy pushed by Democrats, one that plunged the nation into two years of hysterics and fantasy, had been debunked by Mueller.

Moreover, as Collins pointed out, Mueller’s own report stated that “collusion” and criminal conspiracy were basically “largely synonymous.”

When asked to explain this contradiction, Mueller stammered for a few minutes before saying he would “leave it with the report.” Collins pointed out that, yes, the report stated that the terms “collusion” and “conspiracy” were synonymous, Mueller was forced to admit, “Yes.”

It didn’t get better from there. Mueller didn’t know where some of the most infamous quotes in his own report had emanated. He claimed to be unfamiliar with Fusion GPS and Christopher Steele, the Clinton—and DNC—funded contractors who originated and then propelled the Trump-Russian collusion theory.

Perhaps Mueller’s ignorance shouldn’t be surprising, since his independent counsel apparently expended zero effort into ascertaining the reliability of the evidence that helped launch the investigation.

And though there was nothing to stop him, Mueller refused to talk about a number of inconvenient aspects of his own report.

He refused to talk about Joseph Mifsud, the supposed impetus for his own investigation. He refused to discuss the Steele dossier, which not only turned out to be the most effective tool of Russian interference in the 2016 election, but was used in multiple FISA applications targeting at least one individual.

In the end, even Russian election interference, the ostensible purpose of the entire project, was outside Mueller’s expertise.

When Rep. Greg Steube asked him if there was any evidence that a single American had changed their vote because of Russian meddling (the answer, incidentally, is no), Mueller responded that it was “beyond his purview.”

By making Mueller look like a mere figurehead unfamiliar with his own report, Republicans were able to highlight the bias and conflict of interest that plagued an investigation that was not only initiated by a Democratic administration spying on the Republican opposition during an election year, but led by prosecutors who had relationships with opposition Democrats.

Mueller admitted during his testimony that a one-time attorney of a Hillary Clinton aide, who had destroyed evidence by smashing the former top diplomat’s BlackBerry, was in charge of “day-to-day oversight” of his investigation. Others donated to her presidential campaign and even attended her election night party.

Surely, there were better people available to lead a nonpartisan criminal inquiry into the president.

Democrats, in turn, spent their time trying to force Mueller to dramatize the op-ed section of his report on potential obstruction of justice. But when Rep. John Ratcliffe asked Mueller whether his investigation been curtailed, stopped, or hindered at any time, Mueller answered, “No.”

Yet every liberal outlet went with the only helpful Mueller quote they could find, which was his contention that the investigation did “not exonerate” Trump on obstruction.

The president is, of course, wrong to claim he was fully exonerated, but it’s also an absurd standard that seems to have been invented solely for Republicans. Prosecutors only have the authority to charge, not to “exonerate” their targets.

Ratcliffe, in fact, asked Mueller if he could cite a single example besides Trump where the Justice Department “determined that an investigated person was not exonerated because their innocence was not conclusively determined.” Mueller responded: “I cannot, but this is a unique situation.”

Is it? After lecturing everyone about how justice must be meted out equally to all Americans, we now hear that rules are malleable if we’re talking about Trump. As Ratcliffe also pointed out, Trump should not be above the law, but he should not be below it, either.

Under the Constitution, congressional Democrats are free to impeach the president for any reasons they like—and voters are free to judge the president’s actions and vote for someone else. But the Mueller investigation was unable, despite its best efforts, to indict a single person for conspiracy connected to the Trump 2016 campaign, much less the president himself.

Democrats seem unable to come to terms with these inconvenient facts. And Mueller’s presence didn’t help their cause.

David Harsanyi is a senior editor at The Federalist and the author of "First Freedom: A Ride through America's Enduring History With the Gun, From the Revolution to Today."