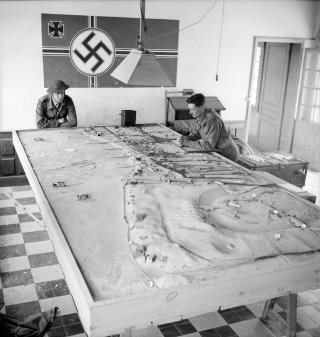 Long before the first soldiers set foot on the beaches of Normandy on the morning of June 6, 1944 military planners knew that getting those troops to Normandy and establishing a beachhead was quite literally just half the battle. In addition to securing and holding the beaches, it would take considerable effort to supply those soldiers especially as they moved inland.

The British had learned valuable lessons a generation earlier during the First World War when it found supplying the troops at Gallipoli on the Turkish coast was difficult, to say the least. The lesson was reinforced in August 1942 when the Allies launched the large-scale cross-channel raid, code-named Operation Jubilee at the French coastal town of Dieppe.

The Allies already knew that the ports at Pas de Calais were too heavily defended to be captured intact, so the Dieppe Raid was conducted to determine if a coastal town with a harbor could be attacked, captured and successfully held. Nothing went as planned and after 10 hours the Allies retreated. Of the 6,000 some troops who made it ashore, more than 3,600 were captured, wounded or killed.

While an Allied defeat, it highlighted the fact that a harbor couldn't be captured. Even if a town could be attacked and held, the Germans were likely to destroy the facilities before they could be captured. This was one of the many reasons that the Allies needed to prepare for an invasion and why mounting such an attack was impossible even a year earlier in 1943.

Instead of capturing a harbor, the Allies opted to bring it with them.

In the late summer of 1943 the Allies developed what would become an artificial harbor. British Prime Minister Winston Churchill had become convinced of the merit of the artificial harbor while taking a bath on Queen Mary when he traveled to the United States in 1943.

After securing the beaches on June 6 the Mulberry Harbours were created by sinking outdated ships – dubbed "Corncobs" – and by installing large concrete structures or "Phoenixes." From these floating roadways and piers – dubbed "Whales" – created a type of pier, which facilitated the unloading of men and material.

Yet for all the hype, the artificial harbor really didn't live up to the job as expected. Many historians have said it was success but have suggested that the efforts could have been used elsewhere.

Simply put, the harbors have largely been overrated for their impact on the invasion. In reality the Allies did a better job of supplying the troops by landing on the beaches and moving inland. Of greater importance than the effort spent on the harbors was finding beaches that could support tanks and other heavy vehicles.

Still, the harbors did aid in the efforts to keep the supplies rolling forward in the early weeks following the invasion. A major storm on June 19 completely destroyed the Mulberry A at Omaha Beach, while the second one, Mulberry B at Gold Beach – which became known as Port Winston – actually saw use for eight months. That was five months longer than its expected lifespan. It was used to land more than 2.5 million men, 500,000 vehicles and more than four million tons of supplies.

The Mulberry Harbours were just one piece of a complex puzzle that helped ensure the Allied victory at D-Day, which brought about the defeat of Nazi Germany.

Image from Reuters: Canadian soldiers study a German plan of the beach during D-Day landing operations in Normandy.