Murder at Baghuz: A Norm, Not an Exception 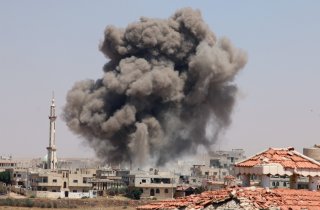 A recent investigative report from the New York Times exposed a major civilian harm incident caused by the United States military in Baghuz, Syria, while it fought the last remnants of the Islamic State (ISIS). The report depicts systemic impunity at the highest levels of U.S. security institutions that many focusing on peace and conflict have come to recognize—and despise—for decades. Yet for the average observer, such incidents are a mere irregularity in a faraway place, much to the preferences of U.S. officials. The unfortunate reality is that such events are commonplace where the United States goes to war and should be defined in honest terms—state-sanctioned murder that is the norm and not the exception.

The stunning nature of the strike at Baghuz, alongside the reactions by individuals and leaders in the U.S. government, reflects this reality. On March 18, 2019, two airstrikes dropped 1,500 pounds of explosives on a crowd at the edge of the last ISIS encampment in eastern Syria. The New York Times originally reported that 2,500 pounds of explosives were used in the strike, but this was later “corrected” by U.S. officials. The destruction left few standing and shocked the U.S. military personnel monitoring the battle from a drone overhead.

The strike killed roughly eighty individuals—mostly women and children. The report from the New York Times was so detailed that it forced U.S. Central Command (CENTCOM), the regional headquarters based in Doha, Qatar, responsible for all U.S. military operations in the Middle East, to admit responsibility for the incident. This admission only came after a series of coverup attempts that included the bulldozing of the strike location, classification of documents, and removal of a whistleblower who attempted to go to Congress with evidence of the atrocity.

The U.S. Department of Defense (DoD) has since released a flurry of statements. Defense Secretary Lloyd Austin, in a November 17 press conference, said “The American people deserve to know that we take this issue very seriously, and that we are committed to protecting civilians and getting this right — both in terms of how we execute missions on their behalf and how we talk about them afterward.”

CENTCOM spokesperson Captain Bill Urban went further, claiming, “these two strikes were legitimate self-defense strikes.” He continued by arguing there was “uncertainty” surrounding the situation because “multiple armed women and at least one armed child were observed in the video, and the exact mixture of armed and unarmed personnel could not be conclusively determined. Likely, a majority of those killed were also combatants at the time of the strike, however, it is also highly likely that there were additional civilians killed by these two strikes.” Pentagon spokesperson John Kirby backed this notion, reiterating that “no military in the world works as hard as we do to avoid civilian casualties.”

Such explanations are not only unacceptable—they flatly reject and downplay the wrongdoing and corrupt impunity in which U.S. security institutions operated during and after the strike. Urban’s justification of the deaths of tens of civilians and classification of them as mostly combatants depict the true nature of thinking within DoD and the U.S. military—one that righteously shoots first and receives exoneration for consequences later.

Worse, Austin’s statement depicts an even deeper disconnect from basic conceptualizations of the responsibility to protect civilians. To suggest that the American people deserve to know the truth—while refusing to acknowledge the rights and aspirations of non-Americans as human beings—suggests that this administration is following previous presidencies in prioritizing U.S. perspectives and ignoring the United States’ obligation to honor international humanitarian law and U.S. statutes on reporting civilian harm outlined in the 2020 National Defense Authorization Act (NDAA).

Ultimately, civilian deaths abroad equate to a domestic political concern to be addressed in the short term—not a real policy issue to be addressed at the expense of interventionist and imperialistic foreign objectives in states the U.S. government owes no answers. The knee-jerk reaction by U.S. officials to defend the strike’s legality, rather than questioning why any strike should be allowed if unarmed civilians have been identified in the first place, speaks to this fact.

Indeed, the Biden administration appears content with sacrificing its so-called human rights-focused foreign policy for geopolitical interests, with the focal point once again constituting the Middle East and South Asia. Rather than using this moment, alongside the botched August 29 drone strike in Afghanistan that killed ten innocent civilians and children, Biden’s team is continuing the same policies it condemned the Trump administration for implementing. This is unsurprising considering Obama-era officials, who kicked drone programs into high-gear, are back in the White House.

From this, the unfortunate reality is clear. Both major political parties in the United States actively push a foreign policy that strives on questionable arms sales to autocrats who also use such weapons with impunity, illegal warfare in multiple countries based on questionable authorizations, and obstruction of international human rights mechanisms such as the International Criminal Court to retain its deteriorating global hegemony. Syria and Iraq epitomize this culture of unchecked militarism given the ongoing Global Coalition Against Daesh has resulted in the deaths of at least 2,024 civilian deaths.

Such an approach is not sustainable and fosters deep resentment in countries experiencing the impacts of such policies. Worse, these actions, such as airstrikes on weddings in Afghanistan or violence committed against impoverished civilians in Iraq, do little to improve foreign sentiments regarding the United States while working against overarching U.S. objectives. This says little of U.S. arms sales to regimes like Saudi Arabia with notorious human rights records in places like Yemen, where some reports indicate that over 18,000 civilians have been killed or harmed because of Riyadh-led coalition airstrikes.

Ultimately, the Biden administration can work to introduce real change across U.S. security institutions in a way that fosters transparency and accountability while pushing the United States away from a military-first nation. Unfortunately, this seems increasingly unlikely as short-term priorities and domestic considerations, alongside geopolitical interests, dominate yet another administration’s thinking. The cruel reality is that those on the receiving end of such policies will continue to suffer as a result.