A Mysterious 5,000-Year-Old Sword Was Discovered by Student in a Venetian Monastery 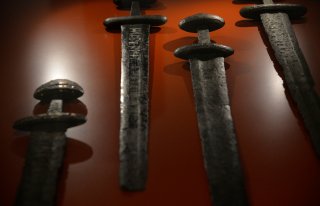 A sword that had been on display as part of a group of medieval items at the San Lazzaro degli Armeni Museum is far older than a few hundred years – in fact, the sword could be 5,000 years old! And it was only recently spotted by a doctoral student who happened to see the sword in the museum's collection.

LiveScience reported that a keen-eyed archeology student made the find of a lifetime when she spotted what could be one of the oldest swords on record. Until Vittoria Dall'Armellina, who was then a doctoral student in archeology at Ca'Foscari University of Venice, first saw the sword when she made a day trip to the monastery of San Lazzaro degli Armeni's small museum in 2017, no one knew of its significance.

The sword had apparently never been recorded in the museum's catalog of Near East ancient objects, and that likely is why it was displayed with the medieval items. To most, it may have even appeared out of place.

However, upon seeing it, Dall'Armellina immediately knew it wasn't a contemporary piece of those other objects. Both her master's degree thesis and her Ph.D. project focused on the origins and evolution of swords of the Ancient Near East. The sword was similar to those found in the Royal Palace of Arslantepe that date back some 5,000 years and which are considered to be the oldest swords in the world.

Scientific analysis has confirmed that the sword didn't just resemble the most ancient weapons in the world, but it was forged around the same time, likely around the year 3,000 BC. The analysis of its metal composition was carried out in collaboration with Ivana Angelini, professor at the University of Padua, and the CIBA, an interdepartmental center for research, study and conservation of archeological, historic and artistic heritage.

It isn't actually much of a mystery of how the ancient sword ended up in the collection.

According to research into the monastery's archives, it had been sent in a donation of gifts from an Armenian art collector named Yervant Khorasandjian to a monk named Ghevond Alishan – also known as Father Leonzio – in the middle of the 19th century. Alishan passed away in 1901 and his belongings were passed on to his monastery.

While it has taken two years of detailed study, including metallurgical research to verify the construction and composition of the sword, the rest of the story is easily filled in.

The monastery is located on a tiny artificial island within the Venetian Lagoon and is now a trove of Armenian cultural treasures. Many Armenian Catholic monks fled to Venice from the Ottoman Empire in the early eighteenth century and received the island for the site of their monastery from the Venetian Senate in 1715. It now houses an abundance of historical, artistic and religious items. Its collection of 3,000 Armenian manuscripts is the third-largest in the world.

Since discovering the sword, Dall'Armellina has completed her archaeology doctorate, but her greatest find may be an item already in a museum.