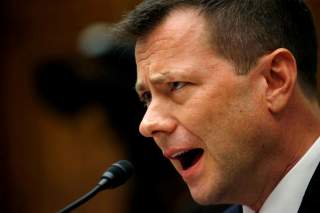 House Judiciary Committee Chairman Jerry Nadler defended Peter Strzok as operating in the “highest tradition” of government service Tuesday, even though the FBI fired the former agent for exchanging anti-Trump text messages with his mistress.

Nadler heaped praise on Strzok in response to a Republican colleague’s remarks during a hearing on election security that the former FBI counterintelligence official had “very much damaged” the reputation of the FBI.

“People like Peter Strzok and others, I think very much damaged — it’s unfair to the rest of the organization because the FBI is truly a great organization, one of the best in this nation,” said Ohio GOP Rep. Steve Chabot.

Chabot was seemingly referring to anti-Trump text messages that led to Strzok’s removal from the special counsel’s Russia team, as well as his firing from the FBI. Strzok exchanged the messages with Lisa Page, a former FBI lawyer with whom he was having an extramarital affair.

Nadler, a Democrat from New York, jumped to Strzok’s defense.

“Let me just say for the record that I think Peter Strzok acted in the highest tradition of government workers,” he said.

The FBI fired Strzok, who was one of the FBI’s top investigators on former Secretary of State Hillary Clinton email and Trump-Russia investigations, in August 2018 over his anti-Trump messages.

Former special counsel Robert Mueller removed him from the special counsel’s team in July 2017 after the Justice Department inspector general discovered the texts.

A report from the inspector general released in June 2018 said that many of Strzok’s texts were “not only indicative of a biased state of mind but, even more seriously, implies a willingness to take official action to impact the presidential candidate’s electoral prospects.”

“This is antithetical to the core values of the FBI and the Department of Justice,” the report said.

The report called attention to an Aug. 8, 2016 text message that Strzok sent to Page in which he said “we’ll stop” Donald Trump from becoming president.

Strzok has acknowledged being critical of the president, but has denied that bias affected his decisions in the Russia investigation.