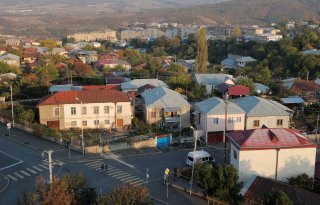 Stepanakert is the capital of Nagorno-Karabakh, a mountain region historically populated by Armenians which is now under a prolonged assault by Azeri forces, Syrian mercenaries transported into the theater by Turkey, and Turkish drones. While most of the fighting has been on the edge of the territory, Stepanakert has also come under fire. Turkish F-16s have reportedly attacked the city’s maternity hospital, and journalists reported heavy shelling on Thursday.

It may seem counterintuitive to send American diplomats to a city under siege, but opening a consulate in Stepanakert would quiet conflict and perhaps promote peace.

The case for an American consulate in Nagorno-Karabakh—or Artsakh as locals call it—is multifold. While Armenia supports Artsakh’s nominal independence and Azerbaijan argues that it should control Nagorno-Karabakh in its entirety based on Soviet-era scrambling of borders, there is little dispute that the region has been its own entity for centuries, a notion reinforced by its rugged topography.

While Kosovo provides a precedent for the region’s independence, opening a diplomatic office or establishing a consulate would both not only help the United States monitor events, but might also dissuade Azeri, Turkish, and Arab mercenary forces who would target civilians in the region.

There is precedent to recognize the importance of even a passive presence. Consider, for example, the 2011 Pearl Monument uprising and its aftermath in Bahrain. Clashes occurred frequently for a few years following and then sporadically for several more between Shi’ite protestors and largely Sunni security forces. At no point did the protestors target Americans, despite the presence of thousands of servicemen and dozens of diplomats on the island, many living in compounds adjacent to Shi’ite villages which were hotbeds of dissent. When the State Department nevertheless relocated diplomats to the capital Manama, Bahrainis were furious: The absence of Americans outside the capital city would remove a deterrent to greater violence by the government against protestors. Diplomats make the best witnesses.

Indeed, this is something that Armenians know well. It was Henry Morgenthau Sr., the U.S. ambassador to the Ottoman Empire, who provided some of the most compelling contemporary accounts of the genocide against Armenians perpetrated by Ottoman Turks (and Kurds). While his efforts to end U.S. neutrality and get the Woodrow Wilson administration to speak out against the genocide failed, Morgenthau’s writing and advocacy ensured that Turkey could not sweep the ethnic cleansing of the Armenians under the rug.

Of course, in the case of Nagorno-Karabakh, the State Department would have to resolve technicalities. The fact that both Armenians and Azerbaijan claim the territory on which Stepanakert sits would complicate any decision to open an office or consulate. After all, consulates typically answer to embassies in a country’s capital. The United States continues to recognize Nagorno-Karabakh as Azeri territory even though Azerbaijan has not controlled it since Soviet days (and even then, it was an autonomous oblast). To attach the consulate to the U.S. Embassy in Baku, therefore, would be unrealistic. Simultaneously, the State Department would hesitate to link a Stepanakert consulate to the U.S. embassy in Yerevan in order to avoid implying U.S. recognition of Armenian claims in order to prevent undermining the Minsk Group process. Again, however, there is precedent: For decades, while the United States withheld recognition of Israeli claims to Jerusalem, the State Department considered the U.S. consulate in Jerusalem as distinct and unattached to any country. Secretary of State Mike Pompeo might categorize a U.S. consulate in Stepanakert the same way in order to bypass the objections of both Armenia or Azerbaijan.

If diplomacy is going to be the strategy of first resort, the State Department must be willing to be on the front lines. Critics who might say the United States would be walking into a second Benghazi are wrong. Benghazi was a tragedy, and perhaps an avoidable one at that, but it should not be cause for diplomatic withdrawal. There can be no influence without presence. Nor would Stepanakert be analogous to Benghazi for an even more basic reason: U.S. allies Turkey and Azerbaijan threaten the former, while terror groups targeted to the latter. The Secretary of State should simply make clear to his counterparts in Turkey and Azerbaijan that their countries would be held accountable for any attack that endangered or damaged an American mission in Stepanakert. It is one thing for dictators like Recep Tayyip Erdoğan and İlham Aliyev to attack Nagorno-Karabakh when they believe they will suffer no consequences; it is another if they risk their diplomatic relationship with the United States over an errant missile or mortar. For the sake of peace, it is time to open a Stepanakert consulate now.