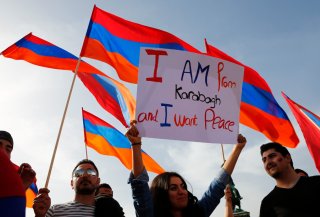 On September 16, Armenia initiated proceedings against Azerbaijan before the International Court of Justice (ICJ). In its statement, Armenia requested that the Azerbaijanis release the Armenians detained during the Nagorno-Karabakh conflict. The Armenians accused the Azerbaijanis of “racial discrimination,” and argued that Azerbaijan was guilty of conducting violence and hatred against ethnic Armenians. Armenia concluded its statement by requesting that the ICJ hold Azerbaijan responsible for violating the International Convention on the Elimination of All Forms of Racial Discrimination.

Azerbaijan then introduced a proceeding of its own. In the counterclaim, the Azerbaijanis stated that Armenia was guilty of “ethnic cleansing,” and argued that the Armenians had broken the current ceasefire as they had laid landmines in the Nagorno-Karabakh region. Azerbaijan concluded its statement by requesting that the ICJ “hold Armenia accountable for its violations.”

Armenian and Azerbaijani representatives then delivered their opening statements in front of the ICJ on October 14 in what was a tense affair. Both parties accused each other of human rights violations in the Nagorno-Karabakh region, and they requested that the ICJ intervene. The hearings will continue over the coming weeks, but it will likely “take years” before a final verdict is reached. The court, however, could rule on emergency measures in a matter of weeks.

According to the United Nations, all judgments made by the ICJ are final, and these decisions are “binding…without appeal.” The ICJ, however, does not have a way of enforcing its decisions. This means that if either party is found guilty of human rights violations, then there is nothing the ICJ can do to ensure that Armenia and Azerbaijan comply with the court ruling. With this in mind, it will be interesting to see how these cases progress.

The ICJ proceedings are the most recent development in what has been a never-ending conflict. The crisis began in 1988 when Armenians residing in Karabakh requested that their territory be transferred from Soviet Azerbaijan to Soviet Armenia. Soviet authorities refused this request, and this spurred protests in the region. Fighting then began between the ethnic Armenians and Azerbaijanis living in Karabakh, and this evolved into an armed conflict.

To this day, the Nagorno-Karabakh region is disputed by the Armenian and Azerbaijani governments. Over the past few decades, numerous ceasefires have been implemented and broken. The ongoing conflict has resulted in the deaths of over 6,000, and the crisis continues without end.

The international community has struggled to identify ways in which it can act in the Nagorno-Karabakh region. It has previously provided financial assistance and humanitarian aid, but this has not ended the conflict. An inability to make a significant impact, however, should not mean that the crisis can be ignored.

The conditions outlined in the deal stated that “all economic and transport links would be unblocked.” Azerbaijan has reclaimed the Ağdam, Kalbajar, and Lachin districts. Turkey is taking part in the peacekeeping process by sending observers to monitor the situation. Finally, Russia is deploying peacekeeping forces to the Nagorno-Karabakh region for five years. In other words, Russia has established a foothold in the Caucasus while Turkey gains “significant influence in the region.”

Unfortunately, the conflict reignited during the summer of 2021, prompting the recent court proceedings at the ICJ. The court is currently hearing Armenia’s and Azerbaijan’s cases, but that doesn't mean the West is off the hook when it comes to caring about Nagorno-Karabakh.

Why should the West care about the Nagorno-Karabakh conflict? First, the outcome of this crisis could significantly impact Europe’s energy security. Currently, Europe imports some of its gas from the Caucasus. Known as the Southern Gas Corridor, the pipeline will carry 16 billion cubic meters of gas annually from Azerbaijan to Europe. If Russia were to establish a greater presence in the Nagorno-Karabakh region, this could see Gazprom force its way into the Caucasus. This gas company would likely want to restrict Southern Gas Corridor sales so that Russia could strengthen its position over Europe. A reduction in gas from the Southern Gas Corridor would lead to a greater reliance on Russian gas, possibly allowing Russia to establish energy dominance over Europe. Over the past few years, Russia has pushed for the creation of the TurkStream and Nord Stream pipelines in an attempt to reroute Europe’s energy supply. This has seen Russia gain considerable influence over Europe.

In addition, there is a high risk that the Nagorno-Karabakh conflict could have an international ripple effect. Currently, Russia has aligned itself with Armenia while Turkey, a NATO member, supports Azerbaijan. If the conflict were to escalate to the point where it involved Russian and Turkish troops, and if a skirmish occurred between these two regional powers, this could force the West into an international conflict. According to NATO’s Article 5, “an attack against one Ally is considered as an attack against all Allies.” If Russia were to attack Turkish troops in the Caucasus, as a NATO member, Turkey ostensibly could call for its North American and European Allies to invoke Article 5.

Overall, Armenia and Azerbaijan have failed to grasp the attention of the international community. Their ongoing conflict has largely gone unnoticed, and Russia and Turkey have attempted to spread their influence in the Caucasus. Therefore, the West must position itself as an intermediary in this conflict. Europe and the United States must send dignitaries to meet with Armenian and Azerbaijani leaders to bring an end to the crisis. Otherwise, if the Nagorno-Karabakh conflict continues, and if the situation escalates, it could lead to an international crisis. The world cannot afford another global war.