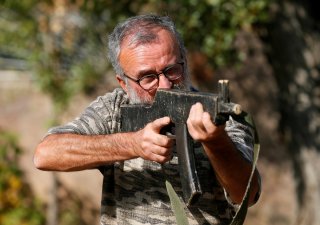 Armenian Prime Minister Nikol Pashinyan’s plea that “Armenians in Nagorno-Karabakh are facing an existential threat” in an interview with FRANCE 24 has almost gone unnoticed. In times when news consumption is reduced to a mindless scrolling habit, it is easy to miss the urgency and tragedy of Pashinyan’s message. For Armenians, the conflict in Nagorno-Karabakh has always been about the centuries-old struggle for survival, after many generations of persecution, forced displacement, and pogroms. But it is equally easy to miss another struggle for survival in Azerbaijan. While thousands of displaced Azerbaijani refugees are eagerly awaiting an opportunity to return to their homes in Armenian-controlled territories surrounding Nagorno-Karabakh, there is much at stake in this conflict for President Ilham Aliyev and power elites in Baku.

In many ways, Aliyev’s long reign is propped by oil and caviar diplomacy, corruption, military buildup, and fierce anti-Armenian rhetoric. Unlike his father Heydar Aliyev, who often called for reconciliation with Yerevan, Ilham’s attitude towards Armenia has always been militaristic. Aliyev famously took to Twitter in 2012 saying, “Armenia as a country is of no value. It is actually a colony, an outpost run from abroad, a territory artificially created on ancient Azerbaijani lands.” After years of hostility and occasional clashes in Nagorno-Karabakh following the Bishkek Protocol, the newly erupted war may have catastrophic consequences for the region. This conflict, regardless of the outcome, will become the quintessential symbol of Aliyev’s rule. The Nagorno-Karabakh war is as much a product of the decades-long confrontation between the two nations and great power politics as it is about Aliyev’s desire to consolidate his power and perpetuate his legacy in Azerbaijan. But as the conflict progresses, Aliyev may find himself a hostage to the situation he created.

Mounting evidence suggests that Azerbaijan’s attack in Nagorno-Karabakh was carefully planned. In late June, the Azerbaijan Defence Ministry announced its decision to purchase Turkish-made Bayraktar drones, which are now actively being used in Nagorno-Karabakh. In August, Azerbaijan participated in the TurAz Kartali 2020 joint exercises with Turkey. Following the event, at least two Turkish F-16 warplanes remained at Ganja International Airport in Azerbaijan which may have been used in the conflict. According to export data, Baku’s defense imports from Ankara surged in the month preceding the conflict in Nagorno-Karabakh. Most importantly, early reports of Syrian mercenaries in Azerbaijan began to circulate shortly before the war erupted. The timing of the conflict is also important. The war in Nagorno-Karabakh comes at a time when the international community is preoccupied with COVID-19, the United States is entering a culminating phase of the 2020 elections, and Russia is kept busy with the Navalny case and Belarusian protests.

At first glance it may seem like the war is already bringing political dividends to Aliyev. Azerbaijan’s military successes and Aliyev’s promises to return lands in Karabakh are driving public enthusiasm for the war. A massive surge of public euphoria and near-total control of information allowed the regime to further marginalize government critics. Moreover, many prominent voices of opposition to the Aliyev regime have become complicit and partake in the information war on behalf of the ruling regime. If the war ends in Azerbaijan’s favor, Aliyev’s legacy would be immortalized.

Yet, things that allowed Aliyev to resume the decades-old conflict may turn against him. First, public pressure to drive Armenians out of Karabakh may be difficult to withstand if the conflict comes to a stalemate or even a loss for Baku. The onset of winter and the failed “blitzkrieg” against Karabakh forces in the first weeks of clashes are complicating the situation. Social media restrictions across Azerbaijan and secrecy around military casualties allowed Aliyev to dictate the narrative of the war for the public. But with reports of the death of high ranking officers in the ongoing clashes, the inevitable rising death toll can turn public enthusiasm into anger.

Second, there is little doubt that the war would be possible without Turkey’s heavy involvement. Ankara expressed its willingness to provide any support to Baku on several occasions. But for all the talk of brotherly ties, such support always comes at a cost. The longer Turkey puts its weight behind Azerbaijan, the more Aliyev finds himself dependent on Recep Tayyip Erdogan’s aspiration for regional leadership. Finally, Aliyev risks spoiling relations with Russia if the conflict spirals out of control. Although the relationship between Moscow and Baku has always been complicated, Russia remains one of the important trade partners for Azerbaijan. Furthermore, Russia-Azerbaijan ties are also held together by interest groups in the Azerbaijani ruling elite.

The war provides a lifeline to Aliyev’s rule, but the same war can also end it. It would only be logical for Aliyev to stop the war now to keep some areas around Nagorno-Karabakh and have a stronger say in future negotiations with Armenia. But pragmatism and authoritarianism do not always mix well.

Aleksey Asiryan is a Ph.D. Candidate in International Relations at York University.