Nagorno-Karabakh: What The OSCE Minsk Group Gets Wrong About Peace 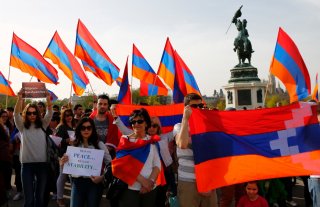 On Friday, October 16, former Ambassador and Minsk Group Chair James Warlick posted a tweet highlighting two key elements of the 2009 Basic Principles for settling the Nagorno-Karabakh conflict. He called on both Armenia and Azerbaijan to accept that a peaceful resolution “is possible only if the occupied territories surrounding Nagorno-Karabakh are returned and there is status for Nagorno-Karabakh.”

Ambassador Warlick was referring to the six Basic Principles articulated by the Organisation for Security and Co-operation in Europe (OSCE) Minsk Group in July 2009, which outlined the core priorities for resolving the conflict. The two he referenced referred to the return of the territories surrounding Nagorno-Karabakh to Azerbaijani control and an interim status for Nagorno-Karabakh providing guarantees for security and self-governance.

The ambassador is certainly correct that these are the two most important issues that need to be addressed, and any diplomatic solution falling short of resolving them will simply postpone rather than preclude a continuation of the conflict. His statement, however short, is also a fair representation of the current diplomatic framework, which proposes that Nagorno Karabakh, or the Republic of Artsakh as its residents have chosen to call their state, maintain a vaguely defined interim autonomous status until a future referendum is held in exchange for a concrete concession in the form of returning the seven territories surrounding it. It is also a fair representation of that diplomatic framework’s major shortcomings—namely its disconnect from the reality of the people it will affect the most. While the idea of an autonomous Nagorno-Karabakh within Azerbaijan’s legal jurisdiction does not, at first glance, preclude the peace process, advocates of that approach ignore the reality of how Baku operates and the threat Nagorno-Karabakh’s legal incorporation would unleash on its Armenian residents.

The latter principle presupposes that autonomy is an acceptable alternative for independence, even temporarily. This implicit assumption ignores the mountain of evidence built over the last thirty years that the Azerbaijani government poses a real threat to Armenians under its control. It places the sole onus of responsibility on Armenia, calling for a withdrawal of Armenian troops from the seven territories surrounding the Republic of Artsakh which were occupied during the Karabakh War in the 1990s. This is presumably to allow the return of the territories’ mostly Azerbaijani civilian population, but does not give equal, or indeed any, serious consideration to the issue of the safety of Nagorno-Karabakh’s current residents. In short, the Basic Principles fundamentally miss the reason why these territories were militarized in the first place and why the people of Nagorno-Karabakh have consistently asked for independence—to protect themselves, a concern which has not been treated with enough gravity by third-party mediators.

The people of Nagorno-Karabakh had been demanding independence for decades during Soviet rule—and for good reason. The Azerbaijani Soviet Socialist Republic had adopted a policy of cultural erasure towards ethnic Armenians in the Nagorno-Karabakh Autonomous Region, denying them opportunities to learn the Armenian language, underfunding Armenian programs, and strategically moving Azerbaijanis into the region to reduce Armenian presence—a goal that former Azerbaijani President Heydar Aliyev acknowledged explicitly.

Western audiences may underestimate the importance of this cultural genocide, but even if the Soviet history is to be set aside entirely, Armenian concerns were ultimately proven right regarding the larger danger it indicated in the coming thirty years. In Nakhichevan, another area historically home to Armenians, which Azerbaijan now governs, the Azerbaijani government actively destroyed the largest collection of medieval cross-stones in the world—artifacts holding vital cultural and academic significance to Armenian history. No standing churches have been observed to remain in Nakhichevan and only one is left in Baku, with its crosses cut off and its chambers once used as pool halls. The fact is that for decades, Azerbaijani nation-building has been predicated on the erasure and destruction of Armenians—for much of that time under the rule of the Aliyev family. No reasonable person would argue it must be this way. Certainly, there are other ways to tie a nation together, yet this is the reality of the situation.

While the members of the Minsk Group are married to the notion that any level of autonomy, even under Azerbaijani rule, is a worthwhile compromise for the people living in the Republic of Artsakh, the last thirty years have demonstrated that the Azerbaijani government cannot be trusted with an Armenian population. State-sponsored curricula teach anti-Armenian hatred, and Azerbaijan prohibits all ethnic Armenians from entering the country. And despite current President Ilham Aliyev’s claims that the residents of Nagorno-Karabakh are his own citizens, he has spent the last three weeks indiscriminately shelling their cities and destroying their homes and places of worship, even soliciting Syrian mercenaries recruited by the Turkish government to help him do it. Armenians’ distrust for the Azerbaijani government is not some ancient ethnic animosity, but a well-substantiated judgment that should be treated as such.

Armenians also have reason to distrust the basic structures of the Azerbaijani government. According to Freedom House’s 2020 “Freedom in the World” report, Azerbaijan is among the ten countries in the world that have undergone the most dramatic declines in democratic freedoms over the past decade. Whereas journalists enjoy some level of freedom in the Republic of Artsakh that has only grown in recent years, in Azerbaijan they are subject to among the most ruthless and oppressive controls in the world. The citizens of Artsakh have become accustomed to relatively free and fair elections, which they would not enjoy in Azerbaijan. In fact, many of Freedom House’s lowered scores for the Republic of Artsakh are attributed to “the threat of military aggression from Azerbaijan.” The Republic of Artsakh certainly struggles, but it is, against all odds, a democracy. The Azerbaijani government, by contrast, has been run for thirty years by the same family, with President Aliyev’s wife serving as his current vice president.

Asking the citizens of the Republic of Artsakh to accept “autonomy” as somehow a step up from the life and government they have built for themselves is disconnected from reality and from humanity. It is unreasonable to expect people to leave behind a democracy, even a struggling one, in exchange for a dictatorship.

Both the state-backed ethnic animosity and the consistent democratic backsliding are valid indicators that the Armenians of Nagorno-Karabakh have far beyond a rational basis to distrust any legal incorporation into Azerbaijani, no matter the rights they may be glibly granted on paper. Indeed, after having their homes indiscriminately shelled by a government that claims them as its own citizens just in the last several weeks, it is unlikely they shall feel safe returning to be its subjects. The only alternative would be fleeing the place they call home—a prospect closely echoing what many of their ancestors experienced during the Armenian Genocide, which the Azerbaijani and Turkish governments also deny to this day.

It is tempting to see the Basic Principles as solutions which would move both countries beyond the constraints of ethno-states, a laudable goal on its own, but a more realistic and sober assessment shows that a government with little oversight and an open disregard and animus for a certain ethnic group cannot be then entrusted with governing those same people. A better approach to peace would be to set more equitable terms for the resolution of the conflict, including the return of the seven territories being predicated on the full independence of the Republic of Artsakh, rather than on vague promises of “status.” Recognition would also allow the people most affected by this conflict to be a party to its solution, and despite Azerbaijan’s aggressive objections, that may even mitigate any excess influence from Armenia itself. Terms such as these would much more closely balance the goals of self-preservation and self-determination on one side and territorial integrity on the other. For thirty years, the people of Nagorno-Karabakh have steadfastly asked for one thing exactly, perhaps their reasons for doing so should be taken seriously.

Anna Mehrabyan is a former Staff Editor at a prestigious, New York-based, international relations think tank and a researcher in the field of Post-Soviet democracies.