The National Ammo Shortage is Felt in Baltimore 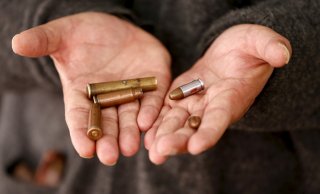 Going back to the spring, there have been reports about a growing ammunition shortage in the United States, one that some warn could last for years.

The shortage has been attributed to manufacturers not being able to keep up with rising demand, which was brought about by the pandemic.

“We have certainly experienced unprecedented demand for all categories of ammunition over the past year—rimfire, centerfire rifle, and pistol, as well as our shotshell products,” Brett Flaugher, president of Winchester Ammunition, told The Reload back in May.

“Over the past year, we’ve seen more than 21 million firearms sold, with over 9 million to first-time gun buyers. This is an incredible number. Overall, more than 52 million people in the U.S. participate in the shooting sports, which is actually 2.5 times higher than the number of people who golf.”

Now, there’s a new report that the shortage is affecting law enforcement.

Baltimore County’s tactical unit, in fact, “nearly depleted its .223-caliber rifle cartridges at the end of July,” after its supplier wasn’t able to get the product from its manufacturer. Baltimore County’s department has had to switch suppliers, the Sun said, getting ammo from a shooting range. They even put out a call for bids, but did not receive any, the newspaper said.

Other strains were reported by other law enforcement agencies in Maryland, including the Howard, Anne Arundel, and Baltimore City police departments.

Warren Eller, the associate professor in the Department of Public Management at John Jay College of Criminal Justice in New York, told the Baltimore Sun about the dynamics he sees driving the ammunition shortage, which he attributed to “a ton of fear.”

“COVID has pretty dramatically affected supply chains,” he said, while adding that "We’re talking about defunding police officers during a time of civil unrest… people are worried about personal protection, coupled with the typical, ‘We just elected an anti-gun Democrat.’”

The Biden Administration has not made any major legislative or executive moves to restrict gun ownership. It did, back in June, announce a “comprehensive strategy to prevent and respond to gun crime and ensure public safety.”

Proposals, according to a White House fact sheet introduced in June, include “establishing zero tolerance for rogue gun dealers that willfully violate the law,” “maximizing the efficacy of the Bureau of Alcohol, Tobacco, Firearms and Explosives (ATF) resources to crack down on rogue gun dealers violating our laws,” and “launching multijurisdictional firearms trafficking strike forces.”

President Joe Biden has also called for Congress to "ban assault weapons and high-capacity magazines, and pass the three House-passed, bipartisan pieces of legislation which would strengthen our gun background check system,” although there doesn’t appear to have been much movement in the current Congress to do either.