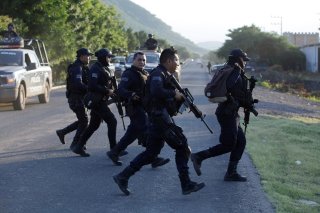 Lawmakers in Mexico filed a lawsuit against ten American gun companies in summer 2021, arguing the gun manufacturers are to blame for the devastating bloodshed south of the border. The Mexican Foreign Affairs Ministry claimed that 70 percent of the firearms used by the cartels were found to have come from the United States. The filing said that at least 17,000 homicides in 2019 were linked to trafficked weapons.

It marked the first time that a national government had ever sued gunmakers in the United States.

"For decades, the government and its citizens have been victimized by a deadly flood of military-style and other particularly lethal guns that flows from the U.S. across the border," the lawsuit states, adding that the flood of weapons are "the foreseeable result of the defendants' deliberate actions and business practices."

There is no denying that Mexico has been gripped in violence for decades as drug cartels have essentially waged open warfare across the nation. Yet, this month Larry Keane, senior vice president and general counsel of the National Shooting Sports Foundation (NSSF), the firearms industry trade association, questioned the validity of the lawsuit and even suggested that Mexico City must answer a few basic questions.

Key among these, wrote Keane, was "where are all the firearms that went missing from the Mexican military?"

That would include firearms supplied by U.S. manufacturers pursuant to the U.S. State Department-approved export licenses to meet foreign defense contracts. In other words, the Mexican government is suing companies for the violence that could have been caused by firearms it legally purchased for its own army.

According to a recent report from Mexican investigative journalist Carlos Loret De Mola, the Mexican Army routinely "loses" about 30 percent of the firearms it purchased from the United States. Yet, instead of accepting any responsibility for the problem, Mexican lawmakers have tried to cast blame on the guns that are illegally trafficked into their country.

"Mexican authorities take no responsibility for failing to enforce their own gun control laws or acknowledge the fact that corruption by narco-terrorists is a way of life for many of their own government officials," Keane added. "Mexico is ranked as 124 out of 180 countries on a corruption index by the watchdog Transparency International. That put Mexico on par with Pakistan and Kyrgyzstan."

"Mexico's lawsuit against U.S. firearm manufacturers is a farce," Keane continued. "The culprit for the lawlessness ravaging America's southern neighbor isn’t in the manufacturing facilities in the United States. It is in the halls of their own government and within the ranks of their own military."