This Nation's Big Economy Is in Trouble Due to the Coronavirus 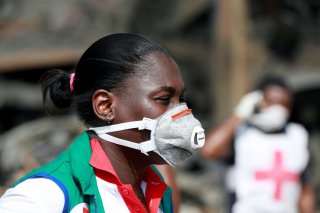 As the coronavirus pandemic seeps into more corners of the world, sub-Saharan Africa has so far come out relatively unscathed. But there are signs the virus is now starting to make its way across the vast region — and as it does, Africa's most populous country and largest economy, Nigeria, could face some of the sharpest losses. Like most of its African peers, Nigeria has an extremely vulnerable and overtaxed health care system that could buckle under the weight of an outbreak. But even if it somehow evades a wider contagion, the growing number of coronavirus cases elsewhere in the world will still risk tipping the country into crisis by slashing demand for its vital oil exports.

One of the puzzling mysteries of the global coronavirus outbreak is why more cases have not been confirmed in sub-Saharan Africa, especially given the region's relatively fragile health infrastructure, significant economic ties to China (the epicenter of the outbreak) and close proximity to Europe (which has had the second-most confirmed coronavirus cases to date, after China).

There are some reasons that might explain why Africa has yet to see such a large breakout of the coronavirus, the first being the relatively limited movement of people between the continent and the rest of the world. African countries accounted for just 5 percent of global international tourist arrivals in 2018, according to the World Tourism Organization. And roughly half of those tourists visited North Africa, not sub-Saharan Africa. African tourists, meanwhile, only accounted for 3.5 percent of global international outbound tourists in 2018.

Age demographics may also be partially to blame for the slower onset of coronavirus cases. The severity of symptoms and fatality rate of the virus scales up with age, with those over 60 most at risk. But due to the lower life expectancies, the populations of sub-Saharan Africa countries have considerably high rates of children and young adults, who are much more likely to be asymptomatic or have only mild symptoms upon contracting the virus. This could lead to lower cases of reported symptoms and lower rates of testing — and thus lower rates of confirmed cases. In Nigeria, for example, the average age of the population is roughly 18 years old, and the average life expectancy at birth is just 54 years old. The median age in North America and Europe, by contrast, is more than twice as high.

But while sub-Saharan Africa’s youthfulness could make its population more naturally resistant to higher fatality rates, this will be highly dependent on the level of medical care that patients will be able to receive, as well as health officials' ability to set up and maintain best practices as it relates to quarantine zones, which will be a struggle. The region is no stranger to infectious diseases and viruses, and indeed many countries have a solid track record in combating outbreaks. But Africa still only accounts for just 1 percent of global spending on health care, with an average of just two doctors per 10,000 people across the continent. And any significant diversion of resources toward combating coronavirus will affect efforts to contain the many other infectious diseases that continue to plague African countries, such as malaria, yellow fever and ebola.

The international community has stepped in to help contain previous outbreaks of deadly viruses in African countries, such as the West African Ebola epidemic that broke out from 2013-16 and the Kivu Ebola epidemic that now appears abating in the Democratic Republic of the Congo. But the international response to a widespread coronavirus outbreak in the region could be constrained by two significant factors. First, many donor countries and doctors who may have been willing to travel to Africa to deal with a major breakout will be busy containing efforts at home. And second, compared with previous outbreaks that the international community has helped contain, the number of African countries that could be affected by coronavirus will be much higher and more widespread across the vast Continent.

If the coronavirus does start to spread significantly across sub-Saharan Africa, Nigeria will likely be hit particularly hard. Nigeria’s doctor to population ratio is four to 10,000 people, which is twice as high as the normal rate across Africa but still far behind developed countries such as the United States, where the ratio is 26 doctors per 10,000 people. Nigeria's overtaxed health care system, combined with its large population at over 200 million people and relatively high level of international travel, is why the country remains one of the World Health Organization’s high-risk countries in Africa for a possible coronavirus crisis.

But even if only a relatively small number of Nigerians end up contracting the virus, the impact of lower oil prices from the ongoing OPEC+ price war between Russia and Saudi Arabia, as well as the demand destruction due to the virus, will have a drastic impact on Nigeria's oil-based economy. Already, the Nigerian government is considering significant spending cuts to counter the potential blow to its crucial oil and gas sector, which accounts for about half of government revenue and over 90 percent of the country's exports. On March 10, President Muhammadu Buhari announced he intended to scale back public spending, which will have knock-on effects for the country's private sector.

Nigeria had been expecting to run a budget deficit of 1.52 percent of gross domestic product (GDP) this year, based on an ambitious projection of 2.18 million barrels per day (bpd) in oil production with prices at $57 per barrel. Nigeria, however, has not reached such production levels in nearly five years, with the country's oil output totaling just 1.79 million bpd in February.  If expenditures do not decline dramatically, Nigeria's budget deficit could thus go well beyond 5 percent of GDP in 2020.

If oil prices remain where they are at roughly $35 per barrel, the value of Nigeria's local currency, the naira, could also decline as much as 10 percent by the end of June. Since the 2014 collapse of oil prices, the Central Bank of Nigeria’s (CBN) has also closely managed the naira’s value and exchange mechanism, leading to a very complicated system of several official rates and a parallel black market rate. The recent drop in oil prices, however, will complicate the CBN's ability to maintain this exchange rate regime by applying more pressure to its foreign exchange reserves, which currently total $36.2 billion in gross reserves. The CBN Governor Godwin Emefiele has previously said that if oil prices fell to below $50 per barrel and reserves fell to between $25 and $30 billion, it could trigger a devaluation of the official rate of the naira.

The devaluation of the naira, combined with the drop in government spending, could lead to a higher share of non-performing loans (NPLs) in the country's embattled banking sector as well. The number of NPLs in Nigerian banks had gradually been declining in recent years, but as coronavirus woes continue to wreak havoc on global and local markets, that is unlikely to remain the case. A higher number of NPLs would affect banks' balance sheets, eventually prompting them to reduce the amount of credit offered to the private sector, thus hitting non-oil GDP growth. Indeed, it appears Nigeria has a dual coronavirus crisis on its hands: one caused by the virus itself, and one caused by the global drop in oil prices — either or both of which will take a significant toll on the country's economy, and increase the risk of a major financial crisis in the coming year.

Coronavirus Is Coming for Nigeria -- and Its Economy is republished with the permission of Stratfor Worldview, a geopolitical intelligence and advisory firm.