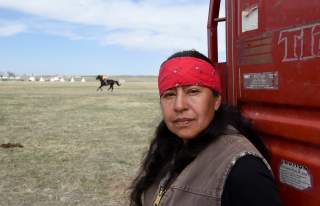 Native American voting groups have made it their mission over the years to get as many of their members to the polls as possible. That effort has even greater urgency, as North Carolina prepares next week to hold one of its most closely watched elections ever.

Ahead of next Tuesday’s vote, tribal members have been knocking on doors to encourage their neighbors to get out to the polls. Working with the Native voting-rights group Four Directions, more than two dozen members of the Lumbee tribe have been hired to visit every home on the reservation, and to even drive people to the polls if necessary.

Just 26% of eligible Native voters cast ballots in last year’s election. Harvey Godwin Jr., chair of the Lumbee Tribe, told ThinkProgress that there are various reasons that fewer Native people turn out at the polls than he would like, and not all of them have to do with voter suppression.

“Sometimes people don’t want to vote, sometimes they don’t have transportation, and a lot of times, it’s apathy,”  Godwin said, adding that organizers “use whatever strategies we have to increase the number of people at the polls who are Lumbees.”

However, it seems a sound bet that — although no one knows for sure just how many votes from the Lumbee Tribe were caught up in the election fraud — voter suppression played a role in a good number of Native ballots that were never cast last year.

The state board of elections ordered a new special election, however, after it was discovered that longtime Republican operative McCrae Dowless had orchestrated a brazen absentee ballot scheme that boosted Harris’ vote total and suppressed votes for McCready. The district’s 700,000 residents have gone without congressional representation since January.

According to a Four Directions analysis, 62% of all requested absentee ballots in the election were not returned in Robeson County, the jurisdiction where many Lumbee Tribe members live. That’s a significantly higher percentage than the statewide rate of 16%, according to data from the U.S. Census Bureau and the North Carolina Board of Elections.

We’ll “use whatever strategies we have to increase the number of people at the polls who are Lumbees.”

That Indian votes might have been discarded or altered angers many in the community, but they aren’t exactly surprised. Native Americans were not guaranteed the right to vote in every state until 1962. They still faced a flurry of barriers expressly designed to make it difficult for them to cast a ballot. In recent elections, Native people in some states have been forced to drive hundreds of miles to cast a vote, overcome restrictive voter ID laws, and stare down intimidation tactics.

Even today, Native Americans in Republican-governed precincts remain easy targets for election fraud. They tend to vote Democratic, and often do not understand election law. Once turned away, they are unlikely to return to a polling booth.

“We believe, given the atmosphere in the country and the use of racism as a tool to divide people, there will be attempts to continue to depress and deny the vote of communities of color, and Indian voters especially.”

Voter suppression in Indian Country has become a more visible issue in recent years. During the Frank LaMere Presidential Candidate Forum in Sioux City last month, a number of Democratic candidates pledged to fight to end the practice if elected president.

The two-day event ended with U.S. Sen. Bernie Sanders (I-VT) giving an impassioned, five-minute speech explaining that such tactics were created because Republicans could no longer win elections on their own.

“We’re going to take on voter suppression in all of its forms. That means you don’t make it impossible to get to a polling place, which was your case. It also means we move to a system that says very simply, that in the United States of America, if you are 18 years of age or older, you have the right to vote, end of discussion,” the senator said.

“We’re going to take on voter suppression in all of its forms.”

That’s not the current reality, but Native groups are vowing to fight until it is. Their efforts go beyond this year’s election, however: The NC-9 race is a dry-run ahead of the 2020 election, when Natives expect Republican voter suppression tactics to be turbocharged.

Lumbee tribal members need to drive long distances to the polls or cast a ballot in front of mostly white poll workers who may not always be accommodating. Once they finally arriving at their voting precincts, Native poll watchers will be on hand to ensure that Natives are not being wrongfully denied their right to vote. In North Carolina, they are conducting get-out-the-vote campaigns and monitoring the polls to ensure Indian votes are actually counted.

Outside interest groups have poured more than $4 million into the race. By contrast, as of last week, Four Directions operated on a shoestring budget of about $30,000 ($4,000 per day), which they used to pay Lumbee Indians to drive fellow tribal members to the polls, according to Semans. A fully robust operation would require $200,000, the group’s executive director O.J. Semans estimated.

“This scenario that we are going into now with District 9 and North Carolina, is going to be similar to every case that we talk about within the seven states, where we say that the Native vote can make a difference,” Semans told ThinkProgress, pointing to past successes his group has had boosting voter turnout in states like North Dakota, South Dakota and Nevada, despite blatant voter suppression tactics.

Sometimes however, organizing isn’t enough, and activists have had to resort to the courts to ensure that Native votes are counted. In 2014, for example, courts ruled in favor of the Oglala Sioux Tribe in a pair of lawsuits against two South Dakota counties. The ruling significantly reduced the long distances that tribal members living on the Pine Ridge Indian Reservation needed to travel to make it to the polls.

Early voting locations were set up at the Pyramid Lake Paiute and Walker River Paiute Tribe reservations ahead of the 2016 presidential election, after a federal judge ruled that the more than 200 mile round trip some Native Americans had to travel to vote was too far.

The early voting locations brought out voters who had never cast a ballot in their lives and allowed tribal members to run their own voting booths, which makes many Natives more comfortable when voting, Janet Davis, a Pyramid Lake Paiute Tribe Council member told ThinkProgress.

“We had a 100-year-old elder from our community who never voted prior and she voted that year in 2016. And we had a lot of first time voters. So it was very successful,” said Davis. “That court case for easy access to voting and equality in Nevada actually sets the precedence for other tribes in the United States as well.”

Since 2014, satellite polling locations have been setup on reservations in Montana, after Mark Wandering Medicine, who lived on a Northern Cheyenne reservation, settled a lawsuit with the former Secretary of State about the onerous distance he faced getting to to the polls. Without the satellite location, Wandering Medicine had to drive 90 miles to make it to the nearest polls.

Sometimes, however, intimidation efforts succeed. Amid a get-out-the-vote campaign by Four Directions during the 2014 midterm elections, the Shannon County sheriff showed up at one of the new early voting polling locations and effectively scared away voters.

The sheriff claimed he was there because he had received a complaint from a county auditor that Four Directions employees were telling Natives who to vote for.

The sheriff “looked like a cowboy from the 1890s, a guy with white hair, a Fu Manchu mustache, a cowboy hat, a big gun on his hip, standing right there where people had to walk in and vote,” said Jean Schroedel, a professor at the California-based Claremont Graduate University who focuses on Native American voting access.

“You were driving people to the polls, particularly grandmothers and aunties and old people,” she said, “and they saw the sheriff and they got scared and they wouldn’t go in.”