NATO’s Navies Prepare for the Threat of Russian Aggression 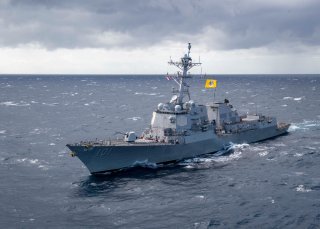 The exercise involved several NATO members, including the United States, Turkey, the United Kingdom, Spain, Greece, Italy, Latvia, Lithuania, the Netherlands, Germany, Denmark, Bulgaria, Croatia, Albania, Bulgaria, Poland, Romania, Portugal, and France. The training is an exercise in coordination and logistics aimed at reducing the complex nature of command-and-control integration of “a carrier strike group, an amphibious ready group and a Marine expeditionary unit to NATO.”

The exercises come at a particularly fraught time for the alliance. Spurred by Russia’s renewed invasion of Ukraine, defense prioritization is the highest it has been in thirty years. Never since the collapse of the Soviet Union has so much attention been paid to European security. The modern Russian Navy is a mere shadow of its Soviet predecessor, and it has suffered several high-profile losses against Ukrainian forces in the Black Sea. The Moskva, a Slava-class cruiser, sank last month after twin strikes by Ukrainian anti-ship missiles.

In a U.S. Navy statement summarizing Neptune Shield, the Commander of the Supreme Allied Command in Europe, Gen. Tod D. Wolters expressed the usefulness of the exercise and explained its effectiveness as a potent outward symbol of alliance unity in light of recent Russian aggression. Wolters added that “vigilance activities like NESH22 strengthen our ability to seamlessly integrate maritime strike capabilities to support deterrence and defence. We continue to do everything necessary to shield the Alliance.”

While the Russian Navy would be unlikely to fare particularly well against the combined naval forces of  NATO, Russia retains a host of weaponry that could prove to be a formidable challenge for NATO, including the world’s largest stockpile of nuclear weapons and concerning stockpiles of chemical and biological weapons. Additionally, though the Russian Navy’s submarine technology trails that of the United States and other NATO allies, Russian submarines are by no means impotent and could prove challenging to track should a conflict between NATO countries and Russia break out.

“NESH22 is an excellent opportunity for improving the capacity to coordinate with Allies in continuing vigilance in order to train for NATO multi-domain and joint operations,” Commander, Allied Joint Force Command Brunssum, General Jörg Vollmer. “NATO’s commitment to promoting peace and security in the Euro-Atlantic area is clearly expressed by the integration of our forces’ capability to rapidly respond in a time of crisis,” he added.