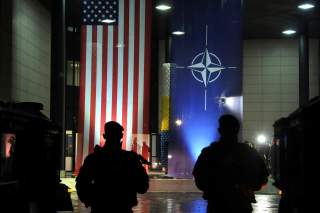 President Donald Trump, who generally zigs-zags his way across the policy landscape, has been remarkably consistent about one issue: his opinion of America’s allies. From his announcement that NATO is “obsolete” and his declaration that Japan and South Korea “do not pay us what they should be paying us,” to his suggestion that he’d come to the defense of NATO members under attack only if they had “fulfilled their obligations to us” and his musings about pulling out of NATO, Trump apparently sees little value in America’s alliances. But there’s much more to the postwar alliance system than meets the eye.

For the always-transactional Trump, NATO and our alliances in the Indo-Pacific (Japan, South Korea, the Philippines, Australia) are "a bad deal for America”—a drain on U.S. resources and a chain that drags the U.S. into faraway conflicts.

In fact, America’s alliances are more than transactions, more than “deals” designed to benefit one side or the other. Our alliances represent shared values, shared interests, shared history and shared sacrifice. What former British Prime Minister Tony Blair said of the U.S.-U.K. alliance is true of the entire postwar alliance system: “When people say to me, ‘Where's your payback from this relationship,’ my answer is, ‘My payback is the relationship.’”

In other words, the alliance system itself is the payback, the dividend, for America. But even if we view our alliances in solely transactional terms, they are, in fact, a good deal for America. First, our alliances are not a drain on the treasury. Yes, there are costs associated with the U.S.-led alliance system, just as there are costs associated with maintaining and insuring a home. Indeed, perhaps the best way to understand our alliances is to look at them as insurance policies.

Insurance, at its core, is about providing protection against worst-case scenarios. Prudent people hope they never have to use insurance, but they realize that paying a little each month or each year protects them against having to pay a lot—or losing everything—if disaster strikes. The same is true in the realm of international security. NATO and our alliances in the Indo-Pacific insure against worst-case scenarios and minimize risk.

For Britain, Europe, Canada, Japan, South Korea, Australia and the Philippines, defense treaties with the U.S. serve as insurance against invasion or attack. Without that insurance, there’s no security, as history has a way of reminding those on the outside looking in—from Cold War Hungary to post-Cold War Ukraine. For the United States, these treaties insure against another Korean conflict, European crisis, or surprise in the Pacific, triggering another war that would inevitably draw in the U.S. due to economic ties, strategic interests and shared values.

Like all insurance policies, there are costs associated with these alliances. U.S. defense expenditures earmarked for Europe, for instance, amount to $36 billion per year. That’s a lot of money. But consider what we get in exchange for that “insurance premium.”

Europe is not at war with itself. Europe (and the Western Pacific, for that matter) are reinforced against invasion and free from any hostile force. Age-old foes (Germany and France, Korea and Japan) have the confidence to collaborate under the U.S. alliance umbrella. States that once were constant sources of international conflict (Germany and Japan) are now exporters of international security.

If those benefits are not direct enough for the transactionalists, consider these: Our alliances serve as an outer ring of security well beyond America’s shores—providing bases that enable the U.S. to project power, sources of material and diplomatic support for American leadership, and force-multipliers for American assets. And we cannot overstate the vast trade and economic benefits that flow from these realities. U.S. trade with NATO allies tops $1.5 trillion annually, with Japan, Korea, Australia and the Philippines $508 billion annually.

The “myth is that our allies are making us poor by free-riding on our military expenditures,” Gen. William Odom, former director of the National Security Agency, argued before his passing. “How are we to explain that the United States has gotten richer than its allies? Proponents of this argument cannot explain why. They fail to realize that our military alliances, by lowering transaction costs, have facilitated the vast increases in international trade from which the United States profits enormously. Our military costs should be seen as investments that pay us back.”

As for the notion that America’s alliances are a chain dragging us into other nation’s problems, the fact is that alliances have rarely gotten America into wars.

It pays to recall that alliances didn't push the U.S. into World War I. “We have no allies,” President Woodrow Wilson bluntly declared during the Great War. Even after America entered the war, Wilson insisted that the U.S. maintain its independence as an “associated” power. Nor was the U.S. drawn into World War II by an alliance. Rather, the trigger was Japan’s attack on an isolated outpost of an isolated America.

Yet by building up a common defense, specifying clear consequences and clear commitments, and recognizing that America’s security is tied to other parts of the globe, the postwar alliance system surely helped prevent World War III. As President John Kennedy observed, “We put ourselves, by our own will and by necessity, into defensive alliances with countries all around the globe.”

These alliances didn't create economic bonds or strategic interests or shared values; rather, they reflected the bonds, interests, and shared values that already existed. Moreover, while alliances didn’t get us into Korea or Afghanistan or Iraq (in 1991, 2003 or 2014), our allies certainly helped us once we were in those fights. Fifteen countries deployed troops to join the U.S. and South Korea in repelling the communist attack across the 38th Parallel. Those allies lost thousands of men.

NATO militaries, infrastructure, and years of interoperability served as the foundation for the coalition that defended Saudi Arabia (Desert Shield) and ejected Iraq from Kuwait (Desert Storm), with Britain, France, Canada and Italy deploying tens of thousands of personnel.

It was always thought that Article V of the North Atlantic Treaty—NATO’s “all for one” collective defense clause—would be invoked when Europe came under attack and sought America’s help. But the only time Article V has ever been invoked was when America came under attack and sought Europe’s help after the 9/11 attacks. NATO immediately dispatched AWACS planes to guard America's skies, freeing U.S. assets to target the Taliban and al-Qaeda in Afghanistan. In the long campaign of campaigns that followed 9/11, NATO has played a key role in fighting our common enemy in Afghanistan, where 1,050 British, European, Canadian, Turkish and other NATO personnel have been killed in action. The 43 Danes killed in Afghanistan, as just one example, would be proportionally equivalent to 2,424 Americans. (The U.S. has lost 2,441 in Afghanistan.)

Eighteen years after the attacks on America’s capital and America’s military headquarters, about half the foreign troops deployed in Afghanistan are not American. “We went in together,” NATO Secretary General Jens Stoltenberg vows. “And when the time comes, we will leave together.”

NATO isn’t the only ally that offered a helping hand in Afghanistan. Australia’s contingent in Afghanistan has fluctuated from a few hundred troops to well over 1,500. South Korea sent a 500-man infantry battalion to Afghanistan. Japan has invested billions into building and training Afghanistan’s security forces.

The campaign against ISIS was built around a strong NATO core, with alliance members shouldering most of the airstrikes and much of the ground-support mission. NATO recently launched a 600-man mission in Iraq aimed at re-training the Iraqi army. Yet that’s only part of the anti-ISIS coalition. Thirty nations have contributed troops to the campaign against ISIS. Australia, Britain, Denmark and France deployed commandoes for kinetic operations. The French aircraft carrier Charles de Gaulle served as a command center during the operation. After Assad’s chemical attacks in 2018, Britain and France joined the U.S. in conducting punitive strikes against his regime.

Reawakened to the Russian threat, 26 NATO members increased defense spending in 2018. By the end of 2020, Stoltenberg reports, NATO’s European and Canadian members “will add $100 billion extra toward defense.”

Germany, Britain and Canada are spearheading NATO’s forward-deployed battlegroups in the Baltics.

In response to Russia’s aggressive actions on its northern flank, NATO is increasing its interest and presence in the Arctic. Noting that China has an “increased presence in the Arctic…in Africa and in cyberspace,” and is “investing heavily in critical infrastructure in Europe,” Stoltenberg announced in August that NATO is coordinating with Australia, New Zealand, Japan and South Korea “to address the rise of China.”