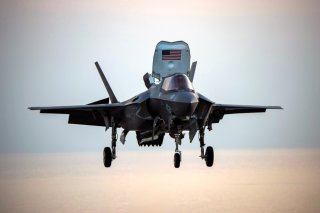 Even as the U.S. Department of Defense (DoD) has offered significant support to Ukraine, it has been quite vocal in announcing its intention to avoid escalation with Russia and a potential World War III scenario between NATO and Moscow.

It is a precarious balance. In fact, while Pentagon planners seek to keep the U.S. intervention in Ukraine within strict limits, they must also ensure that the U.S. military’s readiness and deterrence posture is prepared for any scenario. This has led the DoD to prepare to quickly and forcefully defend “every inch” of NATO territory, including by forward positioning F-35 stealth fighters in Eastern Europe, undertaking training exercises in Poland with the U.S. Army and U.S. Marines, and maintaining a strong U.S. naval presence in the Mediterranean and Baltic seas.

“At sea, we have over 15,000 sailors in the Med and the Baltics on 24 surface combatants and four subs, up from six surface combatants back in the fall. In the air, we currently have 12 fighter squadrons and two combat aviation brigades. And on the ground, we have two corps, two divisions and six brigade combat teams, along with a variety of enablers,”  Gen. Mark Milley, chairman of the Joint Chiefs of Staff, told reporters following a Ukraine summit. He further elaborated on the U.S. military’s buildup on NATO’s eastern flank, stating that U.S. forces have risen from about 78,000 last fall to roughly 102,000 today.

NATO forces are well-prepared to respond to any incursions against its member states’ territories; a wide array of military equipment has been prepositioned to deal with threats from Russia. For example, NATO has a number of available fifth-generation F-35 aircraft which could prove decisive in any defensive operation of, for instance, Poland or the Baltics. Russia is known to operate only a handful of its own fifth-generation Su-57 stealth fighter jets, whereas the U.S. Air Force alone operates several hundred F-35s. A large-scale F-35 operation launched from Poland, Germany, or other parts of Eastern Europe could quickly achieve air superiority and, therefore, decimate any advancing Russian armored units. In this respect, the mere “presence” of F-35s offers a significant deterrent, as Russia would be keen to avoid taking any action that would have its military forces go head-to-head with a large number of the world’s premier stealth fighters.

NATO’s maritime presence could prove decisive as well, given that warships and submarines in the Black Sea or Baltics Sea could be positioned to counterattack with great effect. The Tomahawk missile, for example, can travel 900 miles to destroy inland targets from surface ships and submarines, indicating that a substantial amount of firepower likely operates within striking range of many high-value Russian targets.

Therefore, having a ready contingent of air and naval assets within immediate attack range suggests that NATO could deliver a massive and highly-impactful series of strikes and counterattacks against Russia in the event that a conflict erupts.