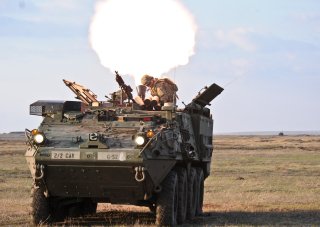 As the Ukraine crisis enters a new stage of escalation, NATO forces are preparing for large-scale exercises in the Baltic region.

"At the training ground of the 17th mechanized brigade in Miedzyrzecz [the Lobusz Voivodeship in western Poland] a ceremony commencing the beginning of the Saber Strike 2022 drills took place," the Polish military announced, according to a report by Russian state news outlet TASS.  "The drills will involve about 1,300 Polish soldiers and about 300 pieces of equipment, including Rosomak armored personnel carriers.”

The Polish army noted that the "the Saber Strike 2022 exercise will run in accordance with the program of drills of Poland’s Armed Forces for 2022,” adding that they "are planned in advance, are not related to any current operation and are a good example of joint capabilities, demonstrating that NATO allies and partners are stronger together."

Saber Strike is an annual international exercise held by the United States Army Europe (USAREUR), focused on military scenarios involving the Baltic states and neighboring countries. This year’s edition of Saber Strike will reportedly focus on the deployment of U.S. troops to the Baltics through Poland.

Reuters reported last week that the first part of a 2,000-strong contingent of U.S. troops and hundreds of military vehicles had entered the Czech Republic en route to Slovakia in anticipation of the Saber Strike drills. A photo published last week by RadioLiberty showed cargo being unloaded at the Malacky airbase in western Slovakia for the 2nd Cavalry Regiment of the U.S. Army, which will take part in the drills.

Slovakia borders Ukraine, but the Slovak Defense Ministry stressed that the upcoming drills are long-planned and not related to the ongoing Ukraine crisis. Slovak authorities reportedly said that 2,000 U.S. soldiers and 600 pieces of military equipment will take part in joint drills with 1,300 Slovak soldiers in the first two weeks of March. The Slovak part of the drills will be held in the central city of Zvolen, located over 300 kilometers from the Ukrainian border. Slovakia, which hosts no foreign NATO troops, announced last month that it is considering accepting a NATO troop presence amid efforts to bolster the alliance’s eastern flank.

As per the Baltic Times, the Lithuanian military warned the country’s population on Monday of potential road congestion due to the movements of NATO vehicles from late February to early March. The report added that the largest movement of allied armor is planned through the border city of Kalvarija, through which NATO forces will transit from Poland to the Lithuania-Latvia border.