NATO F/A-18 Fighters vs. Russian Su-27s: An Incident You Need to Know About 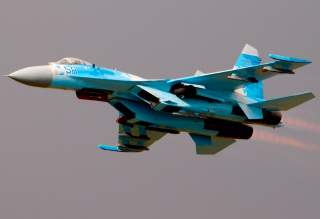 In what is one of the most high-profile interceptions over Baltic airspace to date, a Spanish NATO F-18 fighter was driven off by a Russian Su-27 as it approached a plane carrying the Russian Defense Minister.

Though the story was first reported by the TASS (Russian state news) correspondent who was on board Russian Defense Minister Sergei Shoigu’s plane at the time of the incident, the basic facts of the story are not disputed by either side: a Spanish F-18 from NATO’s Air Policing mission was seen off by a Su-27 after being scrambled to approach Shoigu’s plane as it was flying over international Baltic airspace from the Russian enclave of Kaliningrad back to Moscow. Video footage of the event, published by Russia’s Defense Ministry, shows the Su-27 making a sharp turn into the F-18 and causing it to veer off the Russian VIP plane’s trajectory.

According to NATO spokeswoman Oana Lungescu, the two escorting Su-27’s were without a valid flight plan and were flying with their transponders switched off. F-18’s were scrambled to identify and monitor “the planes a safe distance, but one of the Russian fighters conducted an unsafe maneuver, cutting into the flight path of one of the NATO jets." Lungescu states that NATO had no prior knowledge of who was aboard Shoigu’s Tu-214, which was flying “close to Allied airspace.”

Official Kremlin sources, typically eager to comment on similar cases, have stayed strangely mum on this incident. Nevertheless, Prominent Russian defense commentators sharply dispute NATO’s account. According to a Russian media interview with prominent military expert Alexei Leonkov, it strains credulity that NATO didn’t know who was on Shoigu’s Tu-214. Leonkov further alleges that there was no valid reason for NATO’s Baltic Air Policing Mission to scramble its interceptor craft in the first place, since Shoigu’s Tu-124 was flying with its transponder on.

Defense commentator Igor Korotchenko concedes that it is “difficult to judge whether they knew, or didn’t know, that it was the [Defense] Minister’s plane,” but adds that the “Su-27 pilot’s actions were absolutely legitimate under international law.” According to Korotchenko, it was the NATO pilot whose attempts to “flex his muscles” led to an unnecessary, “provocative” altercation. Korotchenko invoked a 2016 Russian proposal, which has long since fallen by the wayside, for all aircraft in Baltic airspace to always fly with their transponder on.

Interceptions are a routine aspect of Baltic airspace management and have been an exceedingly common occurrence long before the 2014 spike in NATO-Russian tensions after Russia’s annexation of Crimea. Given the frequency with which elite Russian officials fly to and from Kaliningrad over neutral Baltic airspace, it is remarkable that these kinds of high-profile incidents do not occur more often; indeed, it was only several years ago that Shoigu was involved in a near-identical incident with a Polish F-16 fighter over the Baltic Sea. What is relatively new, however, is the increasing appetite in both Moscow and Washington to publicize interceptions as a form of diplomatic pressure-- as previously explained by The National Interest, the politicization of interceptions introduces a host of unintended effects with the net result of making Baltic airspace less safe for everyone.