NATO Has a Role to Play in Fighting Climate Change 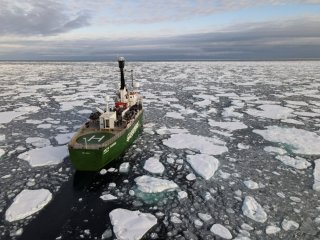 Climate change can’t be deterred or defeated by military action, but militaries can be part of the solution. NATO’s new forward-looking report, NATO 2030: United for a New Era, recognizes the role that the transatlantic alliance can play in slowing ecological breakdown and offers a series of proposals to help address the crisis.

The 138 recommendations that fill out this new strategic framework could bury its reaffirmation of climate change as a driver of the global security environment. But it shouldn’t. Against a backdrop of resurgent great power competition and technological disruption, the threat posed by the warming planet stands alone in scope and scale.

NATO Secretary-General Jens Stoltenberg—a former Deputy Environment Manager of Norway and UN Special Envoy on Climate Change—has repeatedly acknowledged that “climate change is one of the biggest challenges of our time.” Global warming has made extreme weather more intense and more frequent; displaced millions; aggrevated tensions around food, water and energy security; and added complexity and contention to geopolitics.

For NATO, this means increased demands for humanitarian assistance and disaster response, more of the volatility that extremist ideologies depend upon, and a broader, messier threat landscape. Flooding, droughts, and wildfires have also impacted military readiness around the world.

The NATO 2030 report recommends the creation of a Centre for Excellence on Climate and Security, which would monitor and assess the security implications of climate change. This enhanced situational awareness would enable NATO to anticipate, adapt, and act to meet the challenges posed by climate change. Collecting and sharing climate intelligence will be central to predicting future threats to safety and security.

The report also highlights the strategic significance of the High North and the Arctic, where melting ice has made waters more accessible, more vulnerable to exploitation, and more contested. With geopolitical tensions filling the space left open by retreating cold and ice, the report stresses the need to develop a strategy of deterrence and defense in these waters to ensure freedom of navigation is upheld and aggressive moves by state actors are checked.

Finally, and perhaps most importantly, the report emphasizes the need to implement better green technology and smart energy. This is critical. The carbon footprints of NATO militaries are massive. The U.S. military alone releases more greenhouses gas than 140 countries, emitting more than 25,000 kilotons of carbon dioxide a year.

The current push for increased military spending and burden-sharing must be coupled with a commitment to reduce dependency on fossil fuels. Purchasing military equipment for security that accelerates climate change is self-sabotage at an existential level. Stoltenberg has also noted that a shift to renewable energy, such as solar and wind, will increase NATO’s self-sufficiency and in turn its operational independence and flexibility.

NATO’s success rests on its members’ credible commitments to act collectively against shared threats. Climate change cuts to the core of this mission. Flooding, fire, disease, famine, increased migrant flows, economic disruption, political and social instability, and new arenas of great power competition all stem from the same threat. NATO must adapt and do everything within its mandate to meet this reality.

Though most of the lifting will be done by individual countries, NATO can help drive down the global military carbon footprint, better anticipate and respond to climate exasperated threats, and help reinvigorate multilateral commitments in the fight against climate change. With thirty members representing over half of the world’s GDP, NATO’s actions will have a meaningful impact.

Joseph Bodnar is a graduate student at American University’s School of International Service. His writing has appeared in the Dallas Morning News and several national security publications, including the Atlantic Council’s New Atlanticist blog.