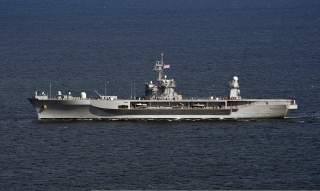 The hand wringing can now stop. With the roll-out of Trident Juncture 18, the largest NATO exercise since the Cold War, NATO members are at long last upping the ante in the Arctic.

Trident Juncture, which runs from October 25–November 7, is a good indicator of how the security situation in the Arctic and High North has changed. The numbers are impressive: the exercise includes all twenty-nine NATO members, plus Sweden and Finland, and an impressive array of troops and equipment. The exercise involves 50,000 personnel, sixty-five ships, 250 aircraft, and 10,000 vehicles. The United States showed up in a big way: for the first time since 1987, it sent the USS Harry S. Truman along with a navy aircraft carrier strike group. Such an enormous effort is not an accident, nor is the exercise’s location in Norway. According to NATO Secretary General Jens Stoltenberg, the exercise comes in response to the fact that the security environment in Europe has deteriorated.

Russia and the Contested Arctic

The reason, of course, is Russia, a nation which has intensified its Arctic focus, not always to the pleasure of its neighbors. And let it be said, NATO allies are not the only ones holding big exercises. Russia’s just-concluded Vostok exercise in 2018 and Zapad in 2017 were also blockbusters.

Russia, more than any other country, has militarized the Arctic. It has revamped Soviet-era bases, built new ones, set up a new Arctic command and new Arctic brigade combat teams, and built new airfields and ports. It is beefing up its fleet of roughly forty icebreakers with nearly another dozen, some of which are nuclear powered.

At least on the surface, fortune has smiled on Russian Arctic territory, which contains vast oil and gas reserves. And Russia has not been shy about claiming/disputing the right to even more resources which may lie along its (or other nations’) continental shelves. Russia also has the good fortune to control the North Sea Route (NSR), which has seen more warming than the North American side. While the route is still open for only part of the year, and the shipping industry is still leery of untested waters, the warming Russian route would allow ships that would normally transit through the Panama or Suez canals to shave many days off their voyages. This unexpected dividend allows Russia to flex some economic muscle—Putin requires all ships transiting the NSR to be escorted by Russian ships, for which they pay a hefty fee.

Hardly a good neighbor, Russia has made mischief through cyberattacks on countries in the region. It has violated national airspace and caused dozens of near-misses, bullied the Baltics and increased its submarine activity. Sweden, Finland, Estonia, Latvia and Lithuania, among others, are frequently harassed by Russian military activity near or within their territorial waters.

The Response Across Europe

The bellicose behavior of Russia in the Arctic and High North has not gone unnoticed.  Longstanding neutral countries such as Sweden and Finland have become “Enhanced Opportunity Partners” in NATO, and both are fully participating in Trident Juncture 18. Finland offered an air base 150 kilometers from Russia’s Kola Peninsula and contributed significant air power along with 2,400 personnel. Sweden hosted U.S. Air Force F-16 fighters and contributed about 2,200 soldiers to the exercise.

Sweden seems to be inching ever-closer to full NATO membership. For the first time in twenty years, it hosted its own exercise, Aurora 17. It announced that it would increase its military forces from 50,000 to 120,000 and introduced conscription to help reach those numbers. It plans to buy sixty next-generation Saab Grippen fighter jets and more submarines. It will significantly increase its military spending from its current level, a bit over one percent of GDP. Recent polls show nearly half of all Swedes favor full NATO membership, a proportion that would have been unthinkable a decade earlier. Former prime minister Carl Bildt, writing about the NATO exercise, said “with no time to waste, Scandinavia is finally breaking fully with the Cold War era doctrine of neutrality, and embracing a more prudent and proactive defense policy.” The catalyst for all this is Russia.

Other countries, too, are re-examining their military strength in the Arctic. Britain just issued a parliamentary report, “On Thin Ice,” warning that the UK must beef up its defensive forces in the region and end its current era of what the report called “benign neglect.” As an initial step, the UK will make permanent its current practice of sending eight hundred Royal Marines for cold weather training in Norway and integrate them into Norway’s defense plans.

Norway clearly sees itself on the front lines of any Arctic conflict with Russia. In addition to the British contingent, it has also welcomed more than seven hundred U.S. Marines for ongoing cold-weather training, and is hosting the Trident Juncture exercise.

Iceland has reopened Keflavik air base (shuttered back in 2006) to host U.S. Poseidon P-8A maritime patrol aircraft, and the United States is spending $35 million in upgrades to Keflavik. Poland’s Ministry of Defense just announced it is opening a new division with three brigades in the eastern part of its territory, less than one hundred kilometers from the Belarus border. It offered to pay $2 billion to have a permanent U.S. military presence on its territory, sweetening the deal by offering to name the base “Trump.”

It’s easy to overestimate Russian strength in the Arctic, and recent accidents and mechanical failures highlight its internal problems with an aging infrastructure and workforce. Living and working north of the Arctic Circle is still difficult. Last week, Russia’s only aircraft carrier, the Admiral Kuznetsov, was damaged when the floating dry dock where it was being overhauled began to sink, toppling a crane across its deck. Loss of electrical power, which may have caused the mishap, occurs frequently. While the aging Kuznetsov may have gotten off lightly, the sinking of one of the world’s largest floating dry docks could have long-term implications for Russia’s ability to service and maintain is navy.

The Kuznetsov was not a one-off, and Russia doesn’t have it all its own way in the Arctic. The Vorkuta mining disaster of 2016 showed the weak underbelly of Russian industrial safety. In general, occupational safety systems for workers have deteriorated as Russia has given priority to military expansion.

How Significant an Exercise?

Trident Juncture focuses on cyber defense, extreme weather conditions, how to respond to critical infrastructure attacks and how to coordinate a major defensive operation. For those who feel the United States and its allies are long overdue in countering Russian Arctic aggression, this holistic and complex exercise should be heartening. And give Russia credit for being able to accomplish what not even Trump could do: awaken a newly invigorated NATO, able to mount a credible response to Russia.

Exercises are by definition limited in scope. They make no permanent changes in equipment or troop strength. They don’t result in additional icebreakers, new bases, nor a sense of a sustained commitment that transcends military and looks at the region from a political, economic, environmental and diplomatic perspective. That kind of vision can only come from politicians in Washington and other NATO capitals, not generals and admirals in the field, however good they may be.

Mary Thompson-Jones is the author of To The Secretary and holds the chair in Women in National Security Studies and Diplomacy at the U.S. Naval War College. The views expressed are her own.