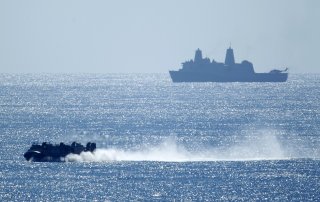 The Navy is transforming its Amphibious Ready Groups (ARGs) to accommodate a new generation of technologies and operations in amphibious assaults.

The Future ARG, as it is called by the Navy, will consist of an America-class amphibious assault ship supported by two San Antonio-class amphibious transport docks to support ship-to-shore operations.

Current ARGs are composed of an amphibious assault ship supported by an amphibious transport dock and a Whidbey Island-class dock landing ship. ARGs are designed to operate with one another as part of an integrated or coordinated multi-faceted mission, with each ship performing a specific and more narrowly-defined set of operational functions.

The ARG of the future, however, will expand amphibious warfare by leveraging a new generation of communications and aviation technologies able to support disaggregated operations. During the 2022 Surface Navy Association Symposium, Amphibious Warfare Program Manager Capt. Cedric McNeal said the new ARGs will be able to transport larger and heavier aircraft and vehicles, incorporate new command-and-control systems, and fire a greater range of weapons.

The arrival of the F-35B, the vertical takeoff and land variant, is one factor that enables the improved ARGs. The new ARGs can support the Navy’s Distributed Maritime Operations strategy designed to optimize long-range weapons and sensors while supporting networked, yet dispersed operations.

The new flight of ships uses a hull similar to the original San Antonio-class but incorporates several key modifications to fill the mission requirements of the LSDs.

“We're going to continue to make sure that capabilities are relevant and ready to support all sorts of operations across the spectrum for the Marine Corps and the Navy going forward into the future,” McNeal said.

The evolution of the ARG aligns with a modern threat environment in which adversaries operate longer-range and more precise weapons. This means approaching amphibious forces might not wish to be concentrated in one area as it could increase their vulnerability to incoming enemy fire. The new ARG structure could evolve further depending upon the pace and impact of the Navy’s emerging fleet of drones and unmanned systems.

Amphibious assaults in the future are unlikely to look anything like World War II-era landings, and will feature a growing number of unmanned systems. McNeal said that ship composition and force formations are likely to continue to evolve as new technologies emerge.

“We have an amphibious force structure study that's ongoing that will evaluate what our requirement in the way of quantities will be going forward into the future,” McNeal said. “That study is planned to complete towards the end of the March timeframe. And that study will inform where we go with future procurements, acquisition strategies to ensure we buy those remaining platforms in the most affordable and smartest way possible.”