The Navy’s New Super Hornets are Ready to Soar 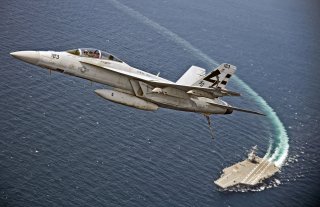 The first of seventy F/A-18 Block III Super Hornets have arrived, according to a Navy press statement. The emerging Block III F/A-18 Super Hornet jets have radar-signature-reducing attributes and a new generation of networking, targeting and avionics intended to propel the carrier-launched aircraft’s service life for decades to come, according to the press statement.

The Defense Department has learned many lessons about lower-radar signatures over the years. Earlier efforts to modernize the Super Hornet included the engineering and construction of smooth, rounded external weapons pods to decrease the amount of radar-return signal generating “hard points” or protruding structures such as weapons hanging under the wings on pylons. This effort to create a full “stealthy” aircraft was unrealistic given the external structure of a F/A-18 Super Hornet. All it did was simply decrease the radar signature to better enable its ability to fly in a high-threat environment against an adversary.

The Super Hornet is configured to fire the AIM 9X Sidewinder air-to-air missile, the AIM 120 Advanced Medium-Range Air-to-Air missile, the AGM-154 Joint Standoff Weapon, the Small Diameter Bomb and the Mark-84 bomb, among others.

Some of the enhancements built into Block II version of the Super Hornet more than ten years ago are likely to influence the Block III variant. For example, the Active Electronically Scanned Array, jamming decoys and an integrated electronic countermeasures system are valuable battlefield assets. They are part of the countermeasures system, which consists of three main components: an onboard jammer, visually cued radar warning receiver and a decoy.

Additionally, an advanced upgrade to the Super Hornets has been underway for many years. This upgrade is supposed to help the aircraft sustain functionality and targeting in an electronic-warfare-challenged environment. A new generation of targeting technology, known as infrared search and track (IRST), or is part of the upgrade. This is supposed to help the Navy jets function in a “jamming environment” by allowing them to use “frequency hopping” to discern and avoid jammed frequencies or other kinds of threats.

The press statement notes that the new F/A-18 Block III has already been integrated onto aircraft carrier flight decks.

This is a complex process likely to assess the degree to which stealth-like enhancements impact the maneuverability of the aircraft and its ability to successfully land on a carrier deck in various sea states and weather conditions. VX-23, the Navy’s test and evaluation squadron “conducted shake, rattle and roll testing, which mimics the aircraft carrier environment to ensure the aircraft and each new system installed can withstand the intense forces of both a catapult-assisted launch and a ship-based arrested landing.”

A risk-reduction enhancement, known as the “Magic Carpet,” goes back nearly ten years too. This is a software application intended to assist and smooth out carrier landings for Super Hornet pilots. This is unsurprising and may be an ambitious attempt to rival or try to mimic the F-35s “Delta Flight Path” software, which uses computer automation and advanced software to ensure proper glide slope for the F-35C variant and vertical landing stability for the F-35B variant.

The Navy has established a fast-paced delivery schedule for its planned fleet of seventy-eight Block III aircraft; the primary defense contractor, Boeing, is contracted to deliver two Block III aircraft, per month, through the end of the calendar year 2024.