Can We Get Along? What U.S.-China Military Talks Reveal About Beijing 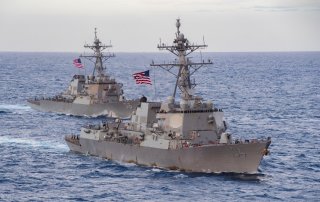 Can the U.S. and Chinese military cooperate? Conduct joint exercises or arrange friendly port visits? It seems unlikely in the current atmosphere between the two countries, caught amid ongoing tensions over the South China Sea, Taiwan, and the concerning pace of Chinese military modernization and nuclear weapons in particular.

These topics may have been discussed in some capacity during a video conference between the Pentagon’s Deputy Assistant Secretary of Defense for China and his Chinese counterpart. A Pentagon report on the discussion revealed very little by way of substantive discussion between the two parties or any progress regarding cooperation on areas of disagreement.

As is often the case in these kinds of formal discussions, each side pledged to keep communication lines open. Apart from this, the Pentagon “read-out” of the discussions included no mention of any particular issues of concern or topics of conversation apart from generally saying the two leaders had a “frank, in-depth and open discussion" on a range of issues affecting the U.S.-People's Republic of China (PRC) defense relationship.

“The meeting is an important component of the Biden-Harris Administration’s ongoing effort to responsibly manage the competition between the U.S. and the PRC by maintaining open lines of communication with the PRC,” the Pentagon statement said.

Cited by the Pentagon as the 16th U.S.-PRC Defense Policy Coordination Talks, the meeting between Dr. Michael Chase and China’s Maj. Gen. Huang Xueping did reportedly cover a handful of “issues” between the two countries.

As for the issues entertained, it certainly seems conceivable that there could have been some measure of progress. However, the two countries’ militaries have a long way to go to bridge the enormous gaps or areas of tension between them. On many areas of concern, the People's Liberation Army and U.S. military are very far apart on a large sphere of issues pertaining to the South China Sea, global influence, and military expansion, not to mention China’s familiar unification rhetoric about Taiwan.

It seems unlikely that China would consider relinquishing any of its provocative territorial claims in the South China Sea or agree to any kind of nuclear arms limitation. On the contrary, the Chinese media repeatedly criticizes the U.S. presence and training in the Pacific region.

Perhaps of even greater concern, China is not likely to discuss or agree to slow down the massive expansion of its nuclear arsenal.  The fact that China is now building a large number of new “ground silos” to house ICBMs has not gone unnoticed by the Pentagon. This is a scenario of great concern given that the majority of China’s launchers had previously been road-mobile systems.  Secretary of the Air Force Frank Kendall was clear that this expansion of nuclear weapons amounts to China building a visible “first strike” nuclear capability.