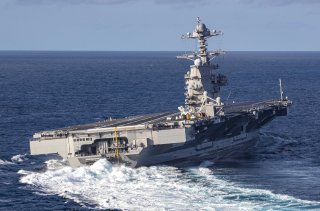 The weapons tests were conducted during Ford's 18-month post-delivery test and trails (PDT&T) phase, which is to ensure her overall deployment readiness. These latest tests were designed to stress the ship's combat system capabilities and also to demonstrate the successful integration of the aircraft carrier's technologies. The testing was a collaborative effort between Naval Sea Systems Command with the greater technical community and the ship's force.

The first certification of integrated combat systems tested the Air Traffic Control Radar Beacon (ATCRB) as well as the Identification of Friend or Foe (IFF), and the tests, which were conducted over several days, also evaluated the ATCRB's ability to track air and surface contacts and to identify friendly and enemy aircraft with the advanced identification system. The IFF is used for positive, secure, friend identification but also to control aircraft and it works with the Ships Self-Defense Systems (SSDS).

Last month, after 14 days at sea, USS Gerald R. Ford conducted flight operations and multiple certifications and completed its first vertical replenishment (VERTREP) with MH-602 Sea Hawk helicopters, which were attached to the "Tridents" of Helicopter Sea Combat Squadron (HSC) 9 while alongside USNS Joshua Humphreys (T-AO-188). That exercise was to prove the ability to conduct simultaneous fueling and replenishment-at-sea, which can increase the ship's flexibility to respond to mission requirements as it minimizes the required time alongside a supply ship.

The Ford­-class was the first new design for an aircraft carrier since the USS Nimitz (CVN 68), and the ship is equipped with two newly-designed reactors, which provide 250% more electrical capacity than previous carriers. This will allow the ship to load weapons and launch aircraft faster than ever before.

However, last month the U.S. Navy announced that it may cap the number of Ford-class carriers at four, and Acting Secretary of the Navy Thomas Modly suggested that the Navy was "certainly thinking about possible other classes."