The Navy Is Bringing F-35s To Redefine Amphibious Warfare 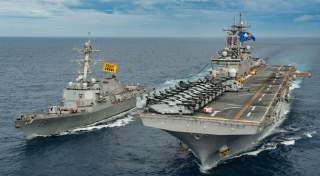 Key point: The success of an amphibious attack needs, or even requires, air supremacy.

(Washington, D.C.) Launching a massive, fast-paced air assault from the sea, providing close-air support for amphibious assault forces and bringing forward-operating surveillance and networking technology to maritime warfare -- are all part of the changing operational calculus introduced by adding F-35s to maritime attack.

With the goal of refining and preparing for these kinds of emerging maritime combat tactics, a high-tech U.S. Navy Amphibious Assault ship recently completed a deployment mission while armed with as many as 13 F-35s, ushering in a new era in amphibious warfare operations.

"A big deck with that many F-35s is beginning to look like an aircraft carrier to me," Brown said.

Execution of this new strategy is, depending upon the threat, heavily impacted by the arrival of 5th-generation aircraft, such as the F-35; the Corp F-35B, now operational as part of Marine Corps Air Ground Task Forces aboard the USS America, USS Wasp and USS Essex, is intended to provide close-air support to advancing attacks, use its sensors to perform forward reconnaissance and launch strikes itself.

The success of an amphibious attack needs, or even requires, air supremacy. Extending this logic, an F-35 would be positioned to address enemy air-to-air and airborne air-to-surface threats such as drones, fighter jets or even incoming anti-ship missiles and ballistic missiles. The idea would be to use the F-35 in tandem with surveillance drones and other nodes to find and destroy land-based enemy defenses, clearing the way for a land assault. These kinds of synchronized attack tactics would naturally be heavily fortified by an F-35; the F-35s Distributed Aperture System, which places 360-degrees worth of cameras around the aircraft, and a high tech targeting sensor called EOTS, or Electro-Optical Targeting System. The aircraft’s computers also allow for something called “sensor fusion,” a technology which integrates information from a host of different sensors on-board a single screen for pilots to view.

Dispersed approaches, using air-ground coordination and forward positioned surveillance nodes, can increasingly use synchronized assault tactics, pinpointing advantageous areas of attack. Not only can this exploit enemy weakness, but it also brings the advantage of avoiding more condensed or closely-configured approaches far more vulnerable to long-range enemy sensors and weapons. Having an advanced air power such as an F-35B, which can bring a heavier load of attack firepower, helps enable this identified need to bring assault forces across a wide-range of attack locations. None of this, while intended to destroy technologically sophisticated enemies, removes major risks; Russian and Chinese weapons, including emerging 5th-generation fighters, DF-26 anti-ship missiles claimed to reach 900-miles and rapidly-emerging weapons such as drones, lasers and railguns are a variety of systems of concern.

Osborn previously served at the Pentagon as a Highly Qualified Expert with the Office of the Assistant Secretary of the Army - Acquisition, Logistics& Technology. Osborn has also worked as an anchor and on-air military specialist at national TV networks. He has appeared as a guest military expert on Fox News, MSNBC, The Military Channel and The History Channel. He also has a Masters Degree in Comparative Literature from Columbia University. This first appeared last month.