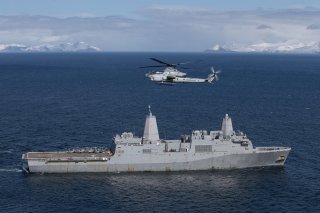 The Navy is also making progress with the USS Richard M. McCool Jr. (LPD-28), a second ship that was launched earlier this month.

“LPD-29 on the fifth of January, that gets that ship into the water into its significant testing activation phase,” McNeal said. “So we can prepare for the trial sequence in 2023 and onto delivery in the summer of 2023.”

The Navy currently operates eleven San Antonio-class ships. It plans to eventually acquire as many as twenty-six.

The San Antonio-class amphibious transport dock is integral to amphibious ready groups (ARGs). The ARG is tasked with transporting at least 2,200 Marines and their equipment in a group called a Marine Expeditionary Unit (MEU).

ARGs can fulfill a variety of missions, including counterterrorism operations, counter-piracy, humanitarian missions, disaster response, and amphibious combat operations. This mission set requires the three ships in an ARG to be able to disperse when necessary and operate independently. Many of these missions are expected to require disaggregated operations where ships and units operate apart from one another rather than in close proximity.

The new group of San Antonio-class ships, beginning with the USS Harrisburg (LPD-30) will be considered Flight II of their class. The Harrisburg is now 20 percent complete on track for its 2025 delivery.

The LPD Flight II mission was previously performed by the Whidbey Island-class dock landing ships (LSD). It includes airport, seaport, and hospital operations and incorporates some modifications to the ships’ well decks.

“The hydrodynamic performance of LPD-17 Flight II platform will be similar to that of Flight I,” McNeal said. “But that allowed us to manage risk and allowed us to adopt approximately two hundred changes to support transitioning us from the Flight I configuration to the Flight II configuration. What we've done is we've taken opportunities on LPD-28 and LPD-29 to buy down risk as we ultimately transition to Flight II and LPD-30.”