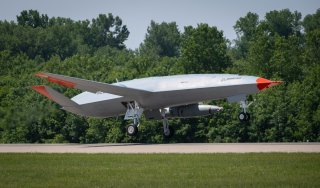 The U.S. Navy is one step closer to fielding MQ-25 Stingray refueling drones aboard its aircraft carriers. The Navy’s 2023 budget request includes $16.8 billion to allow the MQ-25 to begin formal procurement next year.

The Stingray is the first done of its type. It will be capable of refueling the Navy’s carrier air wing, including F-35Cs, F/A-18s, and other carrier aircraft. It is expected to double the combat radius for carrier-launched aircraft.

If a carrier needs to operate 1,000 miles away from shore, deck-launched attack aircraft would need mid-air refueling to make the journey, attack, and return safely. The F-35C is reported to have a combat radius of less than seven hundred miles, meaning it would require refueling to project power against Chinese targets without endangering its aircraft carrier. The MQ-25 Stingray would provide that capability.

The MQ-25 will improve the combat capability of the carrier air wing by enabling attacks over long distances. This could help tip the balance of power in the Pacific in favor of the U.S. Navy if the carrier air wing is able to conduct operations at standoff distances safely away from anti-ship missile range.

The Stingray also appears to incorporate some stealth characteristics. Its blended and rounded wing-body fuselage and lack of vertical structures may make it difficult to detect by radar. That means it could survive in contested environments and at long ranges, especially when compared to larger land-based tanker aircraft.