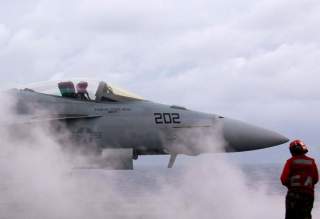 Key point: The F-18 is a powerful and well-made fighter jet. One of the military's mainstays, Washington has ordered more to ensure continued naval dominance.

The Super Hornets would be the first new-build examples of the Block III variant of the F/A-18E/F. The Block III flies farther and carries more weapons than an older F/A-18E/F can do and also is stealthier than earlier Super Hornet models are.

To fill out the air wings and also meet training and maintenance requirements, the Navy eventually would need to acquire around 400 Block III Super Hornets to complement the 260 F-35Cs the fleet hopes to buy.

The F-35Cs would penetrate enemy air defenses in order to attack the most heavily-defended targets and also pass along targeting data to less stealthy Super Hornets as well as to warships firing long-range missiles.

The Super Hornet's job in this "Naval Integrated Fire Control-Counter Air" construct is to carry lots of weapons and loiter just far enough away from enemy territory to lob precision-guided weapons toward enemy forces.

Joseph Trevithick, a reporter for The War Zones, in a 2018 story summarized the Block III's major features.

All of the new Block III Super Hornets will have a lifespan of at least 9,000 flight hours, which is 50 percent greater than that of earlier F/A-18E/F aircraft. The [service-life modification] program will extend the life of existing jets out to the same total flight hours.

On top of this, the final versions of the new and upgraded F/A-18E/Fs will feature five major upgrades. These are conformal fuel tanks, a networked infrared search-and-track capability, physical changes and coatings to reduce the radar signature of the aircraft, new mission computers and data links and a new, single wide-area multi-function display in the cockpit.

The conformal fuel tanks, or CFTs, which Boeing in developing in cooperation with Northrop Grumman, are an extremely important addition to the aircraft in their own right. At their most basic, they extend the range of the Super Hornet and free up underwing space for more ordnance or other stores.

With two CFTs, each of which holds slightly less fuel than does a pair of 330-gallon drop tanks, a Block III Super Hornet could strike targets as far as 600 miles from its carrier.

Still, one major think-tank is unimpressed. The Washington, D.C.-based Center for Strategic and Budgetary Assessments in 2018 recommended the Navy eliminate F/A-18E/Fs from its force structure by the year 2040 and replace them with stealthy, long-range unmanned combat air vehicles, or UCAVs, plus a new "FA-XX" manned stealth fighter.

The main goal of CSBA's proposal is to extend the air wing's striking range to more than 1,000 miles.

"Whereas the Navy’s planned [carrier air wing] would center around 20 F-35C and 24 F-18E/F or FA-XX strike fighters, the proposed [carrier air wing] is built around 18 UCAVs, 10 FA-XX fighters, 10 F-35C strike fighters and six UCAV-based [electronic attack] aircraft. Although the aggregate payload capacity of the proposed CVW is about the same as the Navy’s plan, the 2040 CVW could deliver its payload twice as far or remain on station much longer.