The Navy Just Launched Its Most Deadly Attack Submarine Ever 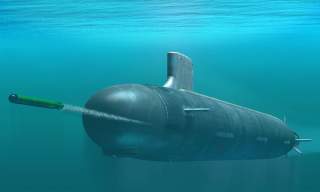 The U.S. Navy has a new nuclear-powered attack submarine.

On Monday, June 25, the ship-builder Huntington Ingalls delivered the future USS Indiana (SSN 789) to the U.S. Navy. The delivery was four months late, originally being scheduled for February of this year.

According to Defense News, “supplier issues, a doubled production rate and cuts to production time from 84 months to 66 month” contributed to the delay. The Navy expects to commission the sub in September 2018, the Naval Sea Systems Command said in a news article announcing the delivery.

The Virginia-class SSNs are 377 feet in length and thirty-four feet by beam. Each ship displaces 7,800 tons while submerged, far less than America’s Seawolf SSNs, and cruises at more than twenty-five knots.

The earlier blocks boasted twelve vertical launch tubes and four 533-millimeter torpedo tubes. As the the press release noted, the Block III boats replace the vertical launch tubes with the Virginia Payload Tubes. According to the website Military Technology, the SSNs can hold up to twenty-six Mark 48 mod 6 heavyweight torpedoes heavyweight torpedoes and Harpoon anti-ship missiles.

America’s latest attack submarines will eventually replace the Los Angeles–class SSNs currently in use. The Seawolf SSNs were initially slated to be the Los Angeles-class’s replacement, but that plan was nixed because of cost overruns and strategic considerations after only three boats were built.

The U.S. Navy has been emphasizing the need to increase the rate of production of the Virginia-class submarines. Washington was initially only expecting to produce two of the new SSNs a year, and only one of the vessels during the years it was also building new Columbia-class nuclear-powered ballistic missile submarine (SSBN). The Columbia-class are the successor to America’s Ohio-class SSBNs.

Last year, however, the U.S. Navy updated its acquisition goals from 30 Virginia-class subs to forty-eight of them. This was part of Adm. John Richardson’s, the chief of naval operations, stated goal of having sixty-six attack submarines in the fleet. At the time of this announcement, Dave Majumdar noted that the U.S. Navy would have to produce at least two SSNs every year, including the years it built the Columbia-class, to have any shot of reaching sixty-six SSNs. But really, Majumdar noted, the U.S. Navy would need to start building three of them each year to reach that goal.

The U.S. Navy is confident it can do this. Rear Adm. Michael Jabaley, who is the top submarine program manager in the U.S. Navy, told Defense News: “I look at it in terms of: What is the capacity of each of these suppliers? Will they be able to handle this change from two boats per year to as much as four and a half boats per year?”

That suggests the Navy hopes to build three SSNs even in the years it is building SSBNs. Part of this optimism stems from the hope that the service can reduce the production time for each boat.  As Defense News noted, “As the Navy moves from Block III Virginia-class subs to Block IV, the focus will be on driving down the production time from 66 to 60 months.”

There are two more submarines left in the Block III purchase. The SSN-790 (South Dakota) is scheduled for August of this year but may come early, according to Jabaley. The SSN-791 is the last vessel in the block and is scheduled to be delivered in February 2019. Given that the last three Block III submarines have been at least a few months late, it’s hard to know if the shipbuilders will meet this schedule.

What is certain is that once the submarines are inducted into the Navy, they won’t lack for work. Combatant Commanders have continued to stress they need more submarines. This is especially true as surface vessels become more vulnerable to anti-ship missiles, especially from China. As then-Pacific Command chief Harry Harris told Congress in 2016: “The Pacific is the principal space where submarines are the most important warfighting capability we have. As far as Virginia-class submarines, it is the best thing we have.”

Zachary Keck is the former Managing Editor of The National Interest.