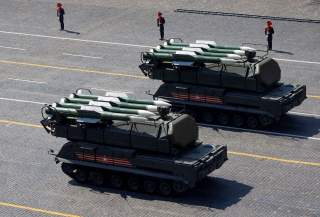 During the Cold War, when the Crimean peninsula was part of the Soviet Union, Russia built an elaborate coastal defense system of underground anti-ship missile launchers.

That system lapsed after the breakup of the Soviet Union and the independence of Ukraine, which owned Crimea. But after Russia seized and annexed Crimea in 2014, the Russian military began refurbishing the region’s defenses.

Now, Russian officials hint that the next step may be deploying advanced anti-ship missiles to the region. “The point at issue is the possible rearming of this system with new types of missiles,” Alexander Leonov, CEO of missile maker Tactical Missile Corporation, told Russian news agency TASS.

The coastal defense system is known as Utyos (“cliff”), or Object 100 to its Soviet builders. It comprised a series of bunkers and underground missile launchers armed with the P-35, a variant of the 1950s Shaddock missile that armed Soviet surface ships and submarines. With a range of about 200 kilometers (125 miles), the thirty-three-foot-long Shaddock was a large, turbojet-powered ship-killer.

The website of Russia’s Black Sea Fleet describes Utyos as being built to survive a nuclear war. “Starting positions and underground constructions protected from atomic weapons were built on the construction sites, which were equipped with gearboxes, missile storages and workshops for preparing and refueling. The missiles in the buildings were on special technological carts with folded wings and moved to the starting positions with special mechanisms. The underground complex had full engineering support, diesel power stations, filtering installations, fuel, water and food supplies, which ensure the vital activity of the object while completely sealing it after an atomic strike. Near the starting points, protected concrete bunkers were housed near the launch points to shelter missiles removed from the launchers.”

The system was built to survive an atomic blast, but it couldn’t survive political fallout. “After the disintegration of the Soviet Union and the division of the Black Sea Fleet, the Utyos turned out to be on the territory of Ukraine and during this period one battalion of this system fell into disuse while the second battalion was deactivated,” TASS said. “The work to restore the system began after Crimea’s reintegration with Russia.”

After Russia seized and annexed the Crimean peninsula from Ukraine in 2014, the Research and Production Association of Machine-Building, a part of Tactical Missile Corporation, began refurbishing Utyos. A Reuters journalist who toured Crimea in 2016 reported seeing eighteen new or refurbished military sites, including naval bases, radar stations, airfields and Utyos bunkers.

Interestingly, Leonov described the refurbishment as “uneasy work,” though he was careful to add that the company “nonetheless fulfilled the assigned task successfully and on time.”

As to what kind of missiles may be deployed in Crimea, Russian media in 2016 suggested that the Bastion mobile coast defense missile system, armed with supersonic P-800 Oniks anti-ship missiles, would be coming to the region in 2020.

Russia, and the former Soviet Union, have a long history of using land-based missiles for coastal defense. For a nation with a huge coastline that spans two continents and two oceans, but has never been a maritime power like America and Britain, coastal defense is a cheaper solution than building a huge navy. Beefing up Crimea’s coastal defenses also soothes Russian fears of a Western amphibious invasion in the Black Sea, and signals Moscow’s determination to hold on to the Crimea.