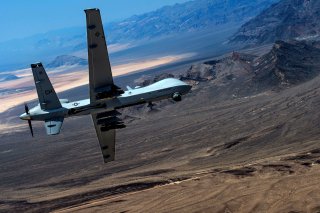 Here's What You Need To Remember: The air force does not have deep experience in maritime surveillance, nor does the Navy have experience with the Reaper system,” the report notes. “Neither of these issues is insurmountable, but what may be more important is establishing a coherent kill chain from Reaper to a Navy shooter.

This would give the Navy the unmanned eyes that it needs, according to a report by the Hudson Institute think tank.

The problem is that while the Navy is developing long-range weapons, such as hypersonic boost-glide weapons and the Long Range Anti-Ship Missile (LRASM), it doesn’t have long-range drones to provide targeting information to aim those missiles, according to the report, titled “If You Can’t See ‘Em, You Can’t Shoot ‘Em.”

“Without an actual ISR/T [intelligence, surveillance, reconnaissance and targeting] complex to identify targets and feed precise data back to the fleet, American long-range missiles will not improve the strategic balance in the Western Pacific,” the report warns. “The US currently lacks ISR platforms, manned or unmanned, that can remain on station for long enough, cover enough ground, and feedback enough information to an American fleet to allow US commanders to shape the combat environment. In the worst case, America’s adversaries may outpace the US in a conflict’s opening phases, forcing Washington to decide between accepting high casualties or ceding an operational region. Less catastrophically, if the US lacks information on China’s movements in the Pacific, this can allow Beijing to manipulate the time and place of potential confrontations, forcing US commanders to choose between unsavory escalation scenarios.”

The Navy plans to buy sixty-eight MQ-4C Tritons, the maritime version of the long-range, airliner-sized Air Force MQ-4 Global Hawk. But the Triton is more of a theater-level surveillance platform than a tactical targeting system. And with a Global Hawk costing about $130 million—Iran shot one down over the Persian Gulf in June—they are also expensive machines not easily risked.

“To supplement the Navy’s MQ-4C fleet, DoD should transfer or redeploy USAF MQ-9 Reaper aircraft modified for a maritime, multi-INT configuration Navy,” the Hudson Institute recommends. “The US Air Force possesses more than 200 MQ-9 Reapers, with many primarily allocated to operations in the Central Command AOR [area of responsibility]. As Washington winds down land operations in Afghanistan, Iraq, and Syria, DoD should consider re-missioning some portion of the air force Reaper fleet to maritime patrol ISR/T missions.”

The report points to the MQ-9B SeaGuardian, a Reaper variant with a high-definition electro-optical/infrared sensor, a multimode 360-degree maritime surface search radar and an ability to function in bad weather. “Presumably, existing Reapers with a similar sensor package could fill a near-term need, and if the Navy’s global ISR/T requirement exceeds the 68 operational MQ-4Cs for which it plans, acquiring SeaGuardian RPVs would be a cost-effective alternative to more Tritons,” the Hudson Institute writes.

However, sending Reapers over the ocean has drawbacks. “First, the air force does not have deep experience in maritime surveillance, nor does the Navy have experience with the Reaper system,” the report notes. “Neither of these issues is insurmountable, but what may be more important is establishing a coherent kill chain from Reaper to a Navy shooter. The issues of target-forwarding from Triton to the shooter, described earlier, would also exist in a marinized Reaper. DoD should report to Congress as soon as possible on the feasibility of such a re-allocation of aircraft and the risks associated with it.”