The Navy Needs Sailors, Not Sailors Trained as Soldiers 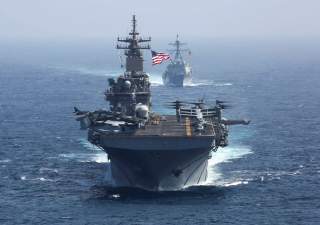 Key point: In an era of great power competition, sailors should be trained to meet the needs of the Navy instead of how to fight land wars.

Over the last 18 years, the Navy Reserve has served as the nation’s third land army, filling gapped Army billets in the War on Terror in the Middle East and Africa. Through its Expeditionary Combat Readiness Centers (ECRC) in Norfolk and San Diego, it has perfected the art of making Navy Sailors into soldiers. This includes stripping Sailors of their coveralls and giving them a sea bag’s worth of combat helmets, flak jackets, and desert boots, after which, they are sent to Fort Jackson, South Carolina for three weeks of basic soldiering skills. As the Navy actively contests a resurgent Russia and an emerging China, both EUCOM and PACOM are calling for more Naval Reservists to fill sea billets, ensuring special missions and regular warships are fully manned and ready. Unfortunately, the ECRCs are not ready for this shift, being unable to send reserve Sailors back through fleet damage control trainers or even issuing them required firefighting coveralls. While the rest of the fleet is shifting to the high-end fight, it’s time for the CNO to radically change the ways the Navy sources, trains, equips, and sends out reserve Sailors to sea-going mobilizations.

Unlike the reserve naval aviation component that still operates and maintains actual combat and logistical aircraft, the reserve surface force decommissioned all of its reserve ships in the late 1990s, leaving coastal riverine squadrons as their only platforms. While some experience and in-rate training can be gained on small boats, those rates, such as Operational Specialists, Sonar Technicians, Electronics Technicians, require hands-on experience on the advance and complex systems found only on warships. Additionally, some reserve sailors in sea-going rates are pure reservists with no sea time, so they are have zero training outside boot camp in damage control and shipboard organization. Some might not know how to even read a ship’s bullseye, a placard that explains how to navigate a ship’s interior.

The solutions? First, add a maritime training week to ECRC after the initial administrative week. This week would include ship tours, wet/fire trainers, and classes about the 3M preventative maintenance system. Next, accelerate and expand the “Reserve Component to Sea Initiative” by shutting down large headquarters reserve units and instead, man the fleet. This ensures that the Sailors drill and train when not mobilized with their active duty brothers and sisters, and can squeeze into fleet training and specialized courses when available. This shift allows reservists to mobilize with their shipmates, vice just showing up to ECRC and then deploying to a thrown-together military detachment with no training or zero workup time.

It is time again to get the reserves back to sea. The CNO must direct the Chief of the Navy Reserve and the Chief of Naval Personnel to quickly make both the Reserve Surface Force and the greater global force management process a system that mobilizes Sailors into Sailors, and not Sailors into soldiers.