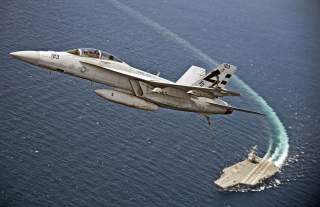 Streamlining acquisition of the Ford-class also naturally brings the advantage of potentially speeding up construction and delivery of the new ships as well, something of significance to the Navy’s fast-tracked effort to reach a 355-ship fleet.

This fourth carrier, called CVN 81, will continue the Navy's ongoing process to acquire a new class of next-generation carriers designed to sustain its ability to launch air attacks from the ocean in increasingly more dangerous modern threat environments.

“Procurement of CVN 81 is currently being planned for inclusion in the 2023 budget,” William Couch, spokesman for Naval Sea Systems Command, told Warrior Maven.

While Couch emphasized that funding will require Congressional approval, he did specify key elements of the Navy’s Ford-Class strategy.

The first one, the USS Ford, is now complete and preparing for operational service. The second Ford-Class carrier, the USS Kennedy, is more than 80-percent built and the third Ford-class carrier will be called the USS Enterprise.

The USS Kennedy will replace the USS Nimitz which is due to retire by 2027; the Ford-class carriers are slated to replace the existing Nimitz-class carriers on a one-to-one basis in an incremental fashion over the next 50 or more years.

“The Navy released a CVN 80/81 two-ship buy Request for Proposal to Huntington Ingalls Industries - to further define the cost savings achievable with a potential two-ship buy. The Navy received HII response May 1 and will consider it in its procurement planning for both ships,” Couch said.

Streamlining acquisition of the Ford-class also naturally brings the advantage of potentially speeding up construction and delivery of the new ships as well, something of significance to the Navy’s fast-tracked effort to reach a 355-ship fleet.

Part of this strategy is articulated in the Navy’s recent 2019 30-year shipbuilding plan, called the “Report to Congress on the Annual Long-Range Plan for Construction of Naval Vessels for Fiscal Year 2019.”

The plan says the Navy is working on “setting the conditions for an enduring industrial base as the top priority, so that the Navy is postured to respond to more aggressive investment in any year.”

Efforts to control carrier costs has been a long-standing challenge for the Navy. Several years ago, the Navy received substantial criticism from lawmakers and government watchdog groups during the construction of the USS Ford for rising costs. Construction costs for the USS Ford wound up being several billion above early cost estimates. Cost overruns with the construction wound up leading Congress to impose a $12.9 billion cost-cap on the ship.

At the time, Navy officials pointed out that integrating new technologies brings challenges and that at least $3 billion of the Ford’s costs were due to what’s described as non-recurring engineering costs for a first-in-class ship such as this.

HII ship developers have been making an aggressive effort to lower costs of the USS Kennedy. Officials have said that the cost of the USS Kennedy will be well over $1.5 billion less than the costs to build the first Ford-Class ship.

This technique, referred to by Huntington Ingalls developers as “modular construction,” was also used when building the Ford; the process welds smaller sections of the ship together into larger structural “superlift” units before being lifted into the dry dock, HII statements explained.

Construction begins with the bottom of the ship and works up with inner-bottoms and side shells before moving to box units, he explained. The bottom third of the ship gets built first. Also, some of the design methods now used for the Kennedy include efforts to fabricate or forge some parts of the ship - instead of casting them because it makes the process less expensive, builders explained.

Also, Newport News Shipbuilding – a division of HII - was able to buy larger quantities of parts earlier in the construction process with the Kennedy because, unlike the circumstance during the building of the USS Ford, the Kennedy’s ship design was complete before construction begins.

As for the design, the Kennedy will be largely similar to the design of the USS Ford, with a few minor alterations. The Kennedy will receive a new radar and its aircraft elevators will use electric motors instead of a hydraulic system to lower costs.