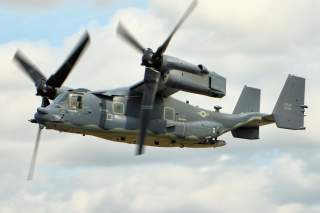 As told by USNI News, there are three main differences in the CMV-22B compared to the Marines’ MV-22B.

The U.S. Navy has accelerated the sunset of the C-2 Greyhound Carrier Onboard Delivery (COD) aircraft, from 2027 to 2024, Rear Adm. Scott Conn, director of air warfare on the chief of naval operations’ staff (OPNAV N98), recently told lawmakers from the House Armed Services seapower and projection forces subcommittee.

“We have accelerated the sundown of the C-2 from 2027 to 2024. We have our first (CMV-22B) aircraft being built in Philadelphia today, going down the line. That aircraft will deliver in FY 20. We then have to do a modified [operational test] and [developmental test] and the only thing … we’re testing are the things different on the CMV-22 as compared to the MV-22. So that’s going to be a very compressed test,” Conn said.

“We then [reach initial operational capability] and get our first three aircraft to deploy in 2021. There is no means by which I can accelerate that any further. When you look at the [military construction], the training that’s required for our sailors to operate and maintain and the aircrew that have to fly it and get the hours they need, we’re going as fast as we can go.”

As told by USNI News, there are three main differences in the CMV-22B compared to the Marines’ MV-22B. The Navy’s aircraft will have an extended-range fuel system, a high-frequency beyond line-of-sight radio and a public address system in the back of the aircraft.

The C-2As are 30 years old and were “nowhere near where we want it to be” in terms of operational availability, Conn said.

Despite the readiness challenges within the C-2A fleet, the planes had had an impressive record of safety until one crashed in the Philippine Sea in November 2017. The plane, from the forward-deployed Detachment 5 of the “Providers” of Fleet Logistics Support Squadron (VRC) 30, had 11 passengers and crew onboard – eight were safely recovered and three died in the crash.