The Navy Wants to Kill Air Defenses from 120 Miles Away. Here's How. 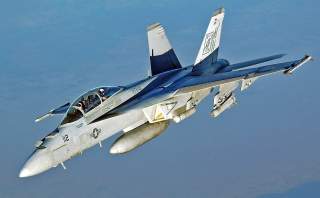 The Navy is fast-tracking a new air-to-ground missile engineered to destroy enemy air defenses from farther distances than existing weapons and succeed in hitting radar systems after they are shut down by adversaries.

The weapon is a new variant of the Advanced Anti-Radiation Guided Missile (AARGM), a missile intended to track and destroy enemy radar used for air-defenses by using a “dual-mode” sensor; the seeker uses millimeter wave technology, inertial navigation systems and GPS guidance.

While engaged in heavy combat, air-to-ground radar, missiles systems and long-range air defenses are often “shut off” as part of an attempt to avoid being detected by air-to-ground electromagnetic sensors from the air. This way, air defenses can turn on and emit a signal just long enough to fire at overhead aircraft before turning off.

“With the dual mode sensor the weapon is able to go find a target that has shut down in a defensive measure, and continue the engagement,” Capt. Matthew Commerford, new program manager for the Direct and Time Sensitive Strike Weapons office, said recently at the Navy League’s Sea Air Space symposium.

The new variant, called the AARGM - ER for “Extended Range” extends the attack envelope from 60 miles to 120 miles, vastly changing the engagement equation for attacking forces. The missile needs to hit longer ranges, Commerford explained, because enemy air defenses have become much more advanced. New air defenses, such as Russian built S-400s, continue to be upgraded with digital processors, improved networking and an ability to use a wider range of frequencies.

Achieving the extended range, Navy and Northrop Grumman developers say, involves reconfiguring the missile to both increase propulsion and decrease “drag” by making it more aerodynamic. The AARGM ER is built with its wings in the back of the weapon to achieve this drag decrease, increase speed and hit farther ranges.

The AARGM ER is slated to fire from both carrier-launched F-18s and Air Force F-35As. The F-35A will internally carry the missile by 2025.

The new weapon is also built with an improved, 150-pound warhead and is engineered with adjustments to accommodate an increased thermal signature caused by higher speeds and stronger propulsion.

An ability to hit “turned-off” enemy air defense radar is provided by an electronic intelligence database mapping the terrain. The missile is guided toward a shut-down radar by virtue of intelligence information collected in what’s called a Digital Terrain Elevation Database. Newly obtained sensor data is compared against this established database to guide the missile to its target.

“Radar emits radiation. We are trying to destroy their ability to radiate against our airplanes and destroy the radar,” Stuart said.

Also, in a significant move given the modern threat environment, the AARGM ER is configured to operate in a GPS-denied environment wherein a satellite signal may be interrupted or “jammed” by an enemy.

”Once you put that millimeter wave active radar on that front end, you can have some deviation with the accuracy of GPS,” Stuart said.

AARGM entered full-rate production in 2012 through a cooperative arrangement between the U.S. and Italy.