The Navy Was Right To Fire Capt. Crozier Over His Coronavirus Warnings 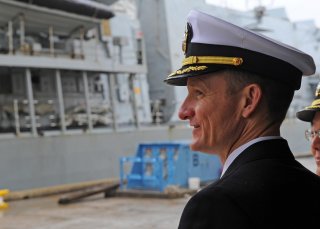 Americans concerned about the COVID-19 coronavirus threat have heard a great deal about how it’s affecting everything from hospitals to grocery stores. With so much to keep track of, though, it’s likely they know little about the outbreak that occurred aboard the aircraft carrier USS Theodore Roosevelt, let alone what to make of the debacle that led acting Secretary of the Navy Thomas Modly to resign.

To quickly recap the saga: A sailor aboard the USS Theodore Roosevelt was diagnosed with COVID-19 on March 22. Within three days, seven more sailors were confirmed to be infected. Two days later, the ship pulled into Guam, where it has remained. On March 30, Capt. Brett Crozier, commanding officer of the Theodore Roosevelt, released a memo that stated in alarming terms his concerns about his ship and crew.

By April 2, cases had reached 114, the Navy was making arrangements to offload the ship’s crew, and Modly had relieved Crozier of command.

On April 6, Modly arrived aboard the ship and, in colorful and emotional language, chastised the crew and further criticized the captain for how things had been handled. The following day, under intense criticism for his own actions and words, Modly tendered his resignation.

To our minds, the key story that extends directly from Crozier’s being relieved of command and from Modly’s resignation is the importance of (1.) observing protocol when executing one’s duty, especially at increasing levels of authority, and (2.) remaining as professional as possible when responding to events, whether during a crisis or in normal peacetime operations.

Subordinates, peers, superiors, and the general public look for poise, professionalism, competency, and a “steady hand on the tiller” from those in a position to set a proper tone, sense of urgency, and deliberate action within our military.

Although an investigation is still underway, Crozier appears to have disregarded normal reporting procedures on matters pertaining to the operational status of his ship, leading to a needlessly heightened sense of alarm among his crew and their families.

His actions caught his reporting chain off-guard, brought the status of a front-line aircraft carrier into question in the minds of Americans, and potentially damaged the appearance of Navy combat readiness in the minds of partners and competitors in the Indo-Pacific region.

Similarly, in taking such immediate, direct action against Crozier, Modly bypassed multiple levels in the Navy chain of command. This arguably undercut the opportunity for the captain’s superiors to act in their capacities to ensure “good order and discipline” within Navy ranks and to render effective support. Further, Modly made his moves in a very public way.

In both cases, emotions appear to have gotten the better of these men, who have otherwise served in exemplary fashion over lengthy, stellar careers to ensure U.S. naval power is ready to defend U.S. national interests.

Policies and command actions related to military affairs should always account for the culture of our services. That culture includes clearly defined legal chains of command, customs, and protocols that have been cultivated over centuries, and the fact that how an action is carried out can have a larger impact than the specific purpose for which the action was taken in the first place.

Both Crozier and Modly appear to have lost sight of that in the heat of a corona-viral moment. Neither action reflected well on the U.S. Navy.

The fact of the matter is, the Navy and its sister services are quite prepared to carry out their wartime duties. Leaders and members throughout the military establishment are keenly aware of the danger that a contagious disease poses to the health and fighting effectiveness of their force. Accordingly, all are taking steps to mitigate the danger while maintaining combat readiness.

Though some have questioned the status of the force, and whether the Theodore Roosevelt incident bodes ill for the Navy, in particular, the U.S. military will get through this in fine shape.

The actions of Crozier and Modly are rare exceptions to the usual way of handling difficult circumstances. We expect that the increased attention from Congress and the heightened sensitivity at the Defense Department and in the Trump administration will help ensure our military forces are able to do what we expect them to do, even during a pandemic.

The Modly-Crozier episode will quickly fade from most memories as we move through the summer, continue to deal with the COVID-19 pandemic, and the nation becomes immersed in the politics of the next general election.

We also cannot forget that China or other challengers might have their own thoughts about doing something provocative in the weeks and months ahead, which will bring national security issues back into view.

For now, how this was handled at all levels shows how imperative it is that cool heads prevail in a crisis, and that how one behaves can be at least as important as the steps actually taken to address an issue.

This article by Dakota Wood, Thomas Spoehr, John Venable, and Cully Stimson first appeared in The Daily Signal on April 4, 2020.