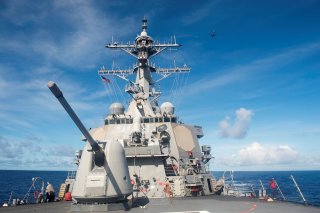 The United States Navy would like to build two new Flight III Arleigh Burke-class destroyers each year while also continuing to design the next class of destroyers.

The Flight III Arleigh Burke variant is the most up-to-date variant of a warship design that has been in service since the late 1980s. The class has proven incredibly versatile, with continuous upgrades and incremental improvements incorporated into the ship’s design.

However, the Arleigh Burkes are fast approaching the limits of upgradability and lack the onboard space to incorporate new technologies. Though still in production, the Flight III tranche of ships will likely be a bridge for the Navy until its Next-Generation Guided-Missile Destroyer is a thoroughly tested, mature design.

The Next-Generation Guided-Missile Destroyer, also referred to as DDG(X), is an ambitious program. However, it is still proceeding with some caution. The Navy is loath to repeat the mistake of recent ship programs that ended wildly over-budget and delivered ships too few in numbers, with insufficient capabilities, and short of overall expectations.

Perhaps most notably, the Navy’s Littoral Combat Ships have been plagued with problems. The Zumwalt-class destroyers were also a disappointment, with a paltry three hulls built due to congressionally-mandated halts after wild cost overruns.

“With DDG(X), we’re designing in margins – space, weight, power and cooling, or SWaP-C – to accommodate future capabilities, capabilities that are under development today and whose will be proven through intense land-based testing and on other platforms already in service,” said Rear Adm. Paul Schlise during an American Society of Naval Engineers symposium, as quoted by USNI News.

“Were we to wait on full maturation of every one of these future capabilities, we might not be bending metal on DDG(X) for decades, and we’d be marking time while our adversaries move forward.”

“Rather than tying the success of DDG(X) to developmental technology, we’re using known, mature technologies on a flexible platform that can be upgraded for decades to come, as the technology of tomorrow becomes more proven and mature. This is an evolutionary ship, not revolutionary.”

The Zumwalt-class, as well as the Littoral Combat Ships, taught the Navy a hard lesson about pinning hopes on immature and untested technologies, a mistake the Navy is keen not to repeat. Instead, the Navy hopes to avoid repeating past mistakes by building tried and tested designs while also methodically building up capabilities and new technologies.