The Navy's Ford-Class Aircraft Carrier: The Best Flattop Ever? 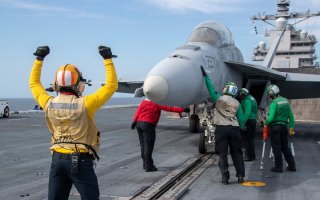 The United States Navy’s aircraft carrier fleet remains both the world’s largest and its most capable, and these vessels have provided the U.S. Navy with an unprecedented ability to project power across the globe. U.S. Navy carrier strike groups have become imposing symbols of American military power. For decades, the core of this capability has been the Navy’s ten Nimitz-class aircraft carriers.

The future of the Navy’s carrier fleet, however, lies with the Gerald R. Ford-class of aircraft carriers. These successors to the venerable Nimitz-class carriers will appear outwardly similar to their predecessors and share a similar hull design, but will incorporate a number of improvements. These improvements include increased radar functionality, better ship stability, and decreased manning requirements that will see crew sizes reduced by up to 20 percent compared to those on Nimitz-class carriers which – along with decreased maintenance requirements – will see lower overall costs across the vessels’ service lives.

Additionally, the new class of carriers will come with improved operational capabilities. Many of these are the result of the Ford-class’ newly designed AB1 nuclear reactors, which will provide a significant amount of electrical power. This power will then be used to power the Ford-class’ new Electromagnetic Aircraft Launch System (EMALS), which is touted as easier on the aircraft it launches – thereby extending their service lives – and will also improve sortie rates. Similarly, the new carriers will make use of a new recovery system in the form of its Advanced Arresting Gear, which is again more reliable and easier on aircraft than the current system onboard Nimitz-class carriers.

The new launch and recovery systems will allow Ford-class carriers to make use of a greater variety of aircraft, including potentially unmanned aircraft, but the new carriers will still draw most of their capability from embarked combat aircraft. Ford-class carriers are envisioned as making use of several fifth-generation F-35C stealth aircraft along with the ubiquitous F/A-18E/F Super Hornets and other aircraft that currently make up carrier Air Wings.

The Ford-class carriers will also be equipped with a host of capabilities designed to improve their survivability in combat.

An Amazing Aircraft Carrier, With a Big Price Tag

While these improvements are all significant, they have not come without a cost. The Navy’s FY2022 budget proposal estimated the procurement cost for the lead vessel in the class – the USS Gerald R. Ford – at over $13 billion in then-year dollars. The budget proposal estimates the cost of the second ship – the USS John Kennedy – to be just under $12 billion, while the third and fourth ships in the class – the USS Enterprise and the USS Doris Miller, respectively – at roughly $12.5 billion each.

Contributing to the high cost of the Ford-class carriers are technical problems with the lead vessel that have resulted in significant delays. The USS Ford was delivered to the Navy in 2017, but since then the new aircraft carrier has experienced problems with important systems including the ELAMS, which through the first 747 shipboard launches experienced ten critical failures. The problem is compounded by ELAMS integration into the ship-wide electrical grid, which means that technicians cannot quickly isolate the systems during operations in order to execute a quick fix. The ship’s new arresting system has also experienced problems, suffering a similar ten failures during its first 763 shipboard landings. The Navy has also reported problems with the Ford’s 11 weapons elevators, which help move munitions onto the flight deck so that they can be loaded onto aircraft. As a result of these issues, the Ford is unlikely to be ready for operational deployment until at least 2022.