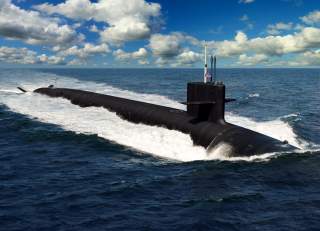 (Washington, D.C.) Almost nobody knows where they are at any given time, yet nuclear-armed ballistic missile submarines quietly patrol dark domains of the undersea realm in strategically vital waters around the globe, bringing the prospect of unprecedented destruction upon potential enemies -- all as a way to keep peace.

Undersea strategic deterrence, intended to ensure a second, retaliatory strike in the event of a catastrophic nuclear attack upon the US, ultimately relies upon the accuracy, resilience and functionality of the Trident II D5 missile. Accordingly, missile tube construction, fire-control technology and tests shots of the nuclear weapon are intended to help the Navy construct and prepare its new Columbia-class submarines on an accelerated time frame.

The Navy is preparing to shoot its Trident II D5 nuclear missile from its emerging new Columbia-class submarine as part of a plan to complete the boat ahead of schedule in the late 2020s.

“We will go through the standard strategic weapons testing and eventually do a test shot to prove out the weapons system before it goes on its first patrol,” Capt. John Rucker, Program Manager, Columbia-class Fleet Ballistic Missile Submarines, said at the Navy League Sea Air Space Symposium.

While the test-shot will of course involve an unarmed missile, it will function as a critical step in preparing the nuclear-armed ballistic missile submarine for decades of undersea strategic deterrence. Rucker said the Navy is now building a special system in Cape Canaveral, Fla., to test the missile systems which will be ready as soon as next year.

“They are doing all of the qualifications right now and are on track to finish in July,” he added.

The Trident II D5s have both been maintained and upgraded in recent years, a scenario which makes it possible for the Navy to literally integrate the exact same weapons system into the Columbia-class as is now arming the existing Ohio-class.

Research, prototyping, science and technology work and initial missile tube construction on Columbia-class submarines have been underway for several years. One key exercise, called tube-and-hull forging, involves building four-packs of missile tubes to assess welding and construction methods. These structures are intended to load into the boat’s modules as construction advances. Rucker said that the Navy recently awarded a new missile-tube construction deal in April. The Columbia-class will have 16 launch tubes rather than the 24 tubes currently on Ohio boats, yet the Columbias will be about 2-tons larger, according to Navy information.

One substantial upcoming variation, according to Pentagon sources, may be efforts to engineer the Trident warhead such that it can carry the emerging Low-Yield Submarine-Launched weapons called for in the Nuclear Posture Review.

A new, life-extended variant of the weapon, called the Trident II D5LE, was first installed in 2017, arming the fleet with an upgraded weapon slated to serve well into the 2040s and beyond. The three-stage ballistic missile can travel a nominal range of 4,000 nautical miles and carry multiple independently targeted reentry bodies, according to Navy and Lockheed information.

The firepower of a Trident II D5 is substantial. According to the a “United States Nuclear Forces, 2018,” report from the Bulletin of Atomic Scientists, each Trident can carry up to eight warheads, bringing an average load-out of approximately 90 warheads per submarine. (Hans Kristensen, Robert Norris)

The Navy is working with Lockheed on a number of key technical upgrades to both modernize and sustain the nuclear weapon. This has included work on the missile's Mk-6 guidance system, with a specific focus on the weapon's electronic modules. These adjustments, developers have explained, make the weapon much more precise.

As part of the technical improvements to the missile, the Navy has been upgrading what’s called the Mk-4 reentry body, the element of the missile that houses a thermonuclear warhead. The life-extension for the Mk-4 reentry body includes replacing components such as the firing circuit. The new Mk-4A variant, according to Hans Kristensen, director of the Nuclear Information Project at the Federation of American Scientists, has an enhanced fuzing and firing unit bringing improved targeting.

Navy and industry engineers have also been modernizing the guidance system by replacing two key components due to obsolescence – the inertial measurement unit and the electronics assembly.

Within the last several years, the Navy has acquired more than 100 Trident II D5 missiles in order to strengthen the inventory for testing and further technological development. The 130,000-pound Trident II D5 missile can travel 20,000-feet per second, according to Navy figures.

“Every single person on my staff that is working on this is contributing to something that will change the future of this country and maintain the way of life we are accustomed to today,” Rucker said.

The new submarines are expected to serve all the way into the 2080s and beyond.