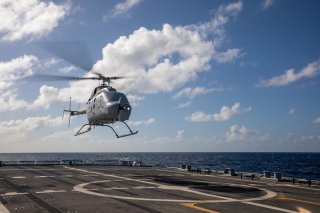 The Milwaukee is operating in the region of U.S. Southern Command. Its MQ-8C has been conducting counter narcotics, identifying targets of interest, and refining surveillance data to prepare for operational deployment, said Capt. Eric Soderberg, MQ-8 Fire Scout program manager, in a press release.

The MQ-8C Fire Scout is a larger, upgraded variant of the existing MQ-8B Fire Scout which now flies from the LCS. The C variant is based on a Bell 407 commercial utility helicopter, but operates high-fidelity maritime sensors that can be used to hunt mines, enemy surface ships, and send real-time video feeds to ships about threats and objects of interest.

While the MQ-8B has performed well with surveillance and mine-hunting missions, the newer MQ-8C brings new advantages such as longer dwell time and expanded capacity reaching beyond the ship’s radar horizon. The MQ-8B operates with up to five hours of “on-station” time, while the MQ-8C expands that to up to twelve hours, Soderberg said.

“With its endurance, it allows the ship to maintain contact which would not be possible with an H-60S (helicopter),” he said.

“COBRA Block 2 is based upon a (light detection and ranging) system which puts laser energy into the water and measures the returns to determine whether they have a mine or not,” Soderberg said.

The Navy is phasing in the MQ-8C over time to fly alongside and ultimately replace the MQ-8B. The transition is expected to occur over the next several years.

While the upgraded MQ-8C has already been operational for some time, the Navy is deploying it now because it has been outfitted with a new radar system making it much more capable than the MQ-8B it is replacing.

The Navy has been working closely with Northrop Grumman to integrate a maritime radar onto the platform. The drone is also specially configured to work in tandem with MH-60S helicopters, Soderberg said.