The Navy's Next Destroyers Will Improve on the Arleigh Burke Class 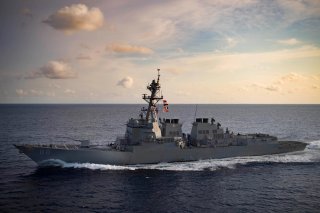 These are just a few of the technologies planned for the U.S. Navy’s next-generation destroyer.

While still in the early phases of development, the Navy’s DDG(X) program has already made considerable progress with requirements, conceptual work, and computer simulation. Initial renderings and technology integration schemes are taking shape.

Much progress has already been made. Chief of Naval Operations Admiral Michael Gilday has approved an initial set of potential requirements and the service has drafted a preliminary capabilities development document for the ship.

Connelly emphasized that the developmental strategy will be “evolutionary” as opposed to “revolutionary,” meaning it will strategically focus on key items in an incremental, measured way to ensure success. The ship will be built to accommodate new technologies, weapons and sensors as they emerge, through the addition of electrical propulsion and energy generation technology called the Integrated Power System. Developers are also planning a “Destroyer Payload Module” which could be used to lengthen the ship and add new technologies.

“We are designing this ship with the capability to in the future be increased in size with that (Destroyer Payload Module),” Connelly said. “So you would cut the ship and slide the block and to increase the size of the ship and allow for additional capability in the future.”

Connelly said the initial focus will be on exploring a potential hull form. The ship will integrate many technologies now being built into the DDG 51 Flight III destroyers, but also improve on those systems.

“We're going to use the (Arleigh Burke) Flight III combat system elements with the new hull form, which will have increased (size, weight, and power), so you can accommodate different, larger and more power-dense systems,” Connelly said.

Initial renderings of the DDG(X) include two 600kw lasers mounted towards the stern of the ship, Rolling Airframe Missiles, and the powerful A/N SPY 6 v1 radar system.

Many of the promising technologies now incorporated into the Arleigh Burke’s Flight III ships will be integrated as a baseline or starting point from which the DDG(X) can evolve into a new generation of warship.

“Flight III is a highly-capable combat system,” Connelly said. “We just finished spending a lot of money to develop a lot of that. It's still highly relevant. The hull form is what is hitting the capacity on the (Arleigh Burke) program. So it makes sense to focus on the hull form now and integrate the Flight III capability, which is highly capable and really great, and then introduce additional combat system capability later, which we would not be able to do on a DDG 51 hull.”