The Navy's Unmanned Surface Vessels Will Be Hungry for Energy 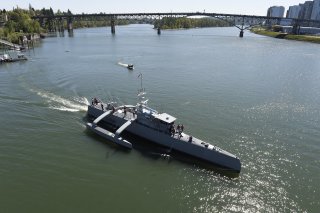 The U.S. Navy’s unmanned systems may be used for forward operating surveillance or as sensor nodes within a larger, multi-domain warfare network. Missions like these will require the unmanned systems to be energy-independent and able to conduct operations without being refueled or resupplied.

Large unmanned surface combatants will require significant amounts of power to maintain radars, sonars, other sensors, propulsion, and command and control equipment. Power sources must also be reliable and survivable.

One system being developed is called Integrated Power and Energy Systems (IPES). It seeks to optimize power and energy storage, efficiency, and distribution. IPES can enable a range of ship functions such as high-powered laser weapons, new generations of radar, and even electric propulsion for manned and unmanned systems. Improved energy storage and output can extend and strengthen digital networking between ships and drones to extend mission dwell time, harden communications connections, and distribute time-sensitive combat data. IPES could allow a ship to operate at ideal speeds while still storing power.

Navy captain Pete Small is the program manager for Unmanned Maritime Systems. Small has been developing new unmanned platforms for many years, such as the large and medium unmanned surface vessels (USVs). Small has been emphasized the need for open architecture and advanced interfaces to enable technological growth, sensor payload modularity, continuous upgrades, and on-board power management.

IPES is configured for the future, meaning it is built to be upgraded. That is part of why the interfaces are developed to enable maximum interoperability. The Navy is now preparing a special “integration lab” where new technologies can be tested and refined before being put on a ship. Kevin Knowles, Northrop Grumman USV campaign lead, explained that efforts to engineer efficient and workable interfaces is something that can be supported with great effect by the integration lab.

Increased computer automation can improve efficiency and overall ship performance. That’s one reason Northrop Grumman developers are working on ensuring the system and the networks that breathe life into the IPES architecture themselves are hardened against potential intruders or cyberattacks.

“You need to be able to make sure that, someone doesn't go in there and start to mess with your delicate automation systems or impact your written navigation systems,” Knowles said. “So we've done a lot of thinking and provided some input in cybersecurity.”

All of this is intended to support, enable, and fortify the Navy’s Distributed Maritime Operations strategy. Maritime warfare is expected to be more dispersed and defined in large measure by breakthrough weapons and sensors with much greater range, precision, and data-transmission capability.

Northrop Grumman’s IPES developers are working to support the energy requirements of dynamic weapons and sensors, autonomy, computer automation, and unmanned systems. These technologies are expected to form the conceptual, operational, and tactical foundation of modern maritime warfare.