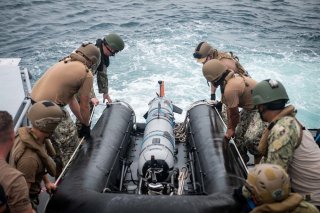 The U.S. Navy’s new Ford-class aircraft carriers, America-class amphibious assault ships, submarines, and destroyers are all praised for their technological sophistication and performance. But some other systems are also worthy of recognition.

Huntington Ingalls Industries (HII) is widely known for its work on large warships and submarines. But the firm has also been designing and producing underwater drones to the Navy for many years now. It performed the first ever submarine-launched undersea drone in 2015. The REMUS drone was a milestone in undersea warfare history.

“In 2015, the U.S. Navy launched a REMUS 600 from a dry deck shelter of a Virginia-class submarine – this was the first UUV in history to be launched from a submarine,” an HII statement to the National Interest said.

The Navy has launched several undersea drones from submarines since then, including some from submarine missile tubes. The REMUS drone class, which has been in existence for twenty years, includes the REMUS 100, REMUS 300, REMUS 600, and large REMUS 6000.

Variants of the REMUS now support several Navy programs, to inlcude the MK18 for mine countermeasure operations and LBS-AUV for collection of oceanographic data.

“One of the things that I'll talk about that's really developed over the last couple of years, and, and significantly recently, is the Navy's strategy towards unmanned systems,” said Capt. Pete Small, Program Manager for Unmanned Combat Systems, Naval Sea Systems Command, at the 2022 Navy Surface Warfare Association Symposium. “So you can trace this all back to the national defense strategy of 2018. And everything stems from there that's well known and established. But even back in 2018, the NDS was talking about the need for autonomous systems to gain competitive military advantages.”