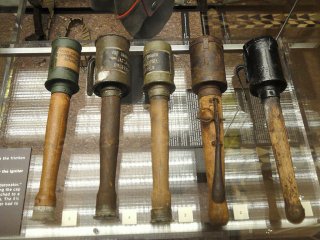 The German “potato masher” hand grenade of World War Two fame is easily identifiable by its grey cylindrical head and wooden handle, though it was originally developed during the First World War. The Stielhandgranate, as it was known in German, was lighter than the preceding German hand grenade and was intended to give the German infantryman greater range.

Unlike the majority of hand grenade designs, the Stielhandgranate design was ignited by friction. Inside the hollow wooden handle, a steel rod was attached to a string. After the string was pulled, a shower of shower of sparks lit a fuse that burned for approximately 4.5 seconds before exploding. The Stielhandgranate had some advantages and disadvantages.

Because of its odd and bulky shape, less grenades could be carried by each individual soldier. It also took more time to prime the grenade before throwing it. At the base of the wooden handle, a metal cap needed to be unscrewed before the string could be accessed, which was slower than American or British grenades, in which a pin was simply removed, spoon discarded, and grenade thrown.

The Stielhandgranate was not a fragmentation grenade in the same sense as American, British, or even Soviet grenades were. These Allied grenades had thick metal cases that shot out metal pieces when they exploded over a large area. These kinds of grenades were more useful in large, open areas like the outdoors, trenches, or open urban areas.

In contrast, the Stielhandgranate had a comparatively thin out casing. While the casing would explode outwards and create a small shower of flying metal, the case was quite thick and the grenade was more like a concussion grenade, useful in confined spaces like the indoors, underground, or inside tanks or other protected vehicles.

The German infantryman lacked a portable handheld explosive that could be used against armored vehicles, bunkers, or other buildings other than the Stielhandgranate, which lacked the explosive power to reliably destroy those types of targets.

One innovative solution was to remove the sticks of other grenades and bundle them together around a central grenade with a handle. This setup potentially gave soldiers more explosive force, though building a bundle charge would take a significant amount of time. The grenade bundle would also be significantly heavier, and thus harder to throw.

The Stielhandgranate was copied by Japan, China, and Vietnam, and was used in various conflicts worldwide, though foreign copies were often less reliable or less powerful than their German parent grenade. Production in Germany ceased after 1945.