Nazi Germany and Imperial Japan Each Had Eyes on Madagascar 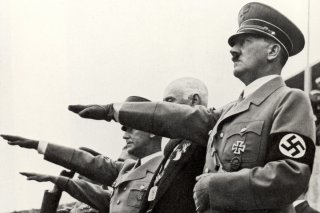 During World War II, Nazi Germany and Imperial Japan were allies, two members of the Axis Powers. However, where the Allied powers actively worked together and coordinated efforts, there was little actual cooperation between Germany and Japan. Never once did their respective forces conduct an operation together, and about the closest actual cooperation was the Monsun Gruppe, a force of German U-Boats that operated in the Indian Ocean from bases at Japanese-held Penang, Singapore, Batavia and Kobe.

While no formal operations between the two Axis powers materialized, each had designs on the French colony island of Madagascar. That despite the fact that Axis powers had negotiated a division of Asia, which put everything east of seventy degrees longitude under the sphere of control of Japan, and everything to the West under Germany’s control. That would have placed British India under Japan’s control while Germany’s border in Russia would have been just a base for the iron ore deposits in the eastern Ural Mountains.

Japanese operations in the Indian Ocean had been limited during World War II, but it still considered an invasion of the Vichy French-held Madagascar, which Admiral Yamamoto thought would offer the perfect base for submarines. How the Japanese planned to seize the island and then maintain control likely is why an actual operation was never mounted.

More importantly, it apparently caused a rift between Berlin and Tokyo in 1942. But relations between the two countries were not that strong to begin with. It has been well-established as a blatant racist Hitler disliked all non-European peoples, even if he did admire the Japanese military spirit. The Germans saw that Madagascar was on their side of the division line, but also had their own “Madagascar Plan,” which called for the forced relocation of the Jewish population of Europe to the island.

The idea to resettle Jews on the island had first been investigated by the Polish government in 1937 and was then revived by the Nazis in 1940. However, after the failure to defeat the British in the Battle of Britain, the plan was subsequently shelved.

Instead, fearing that the Japanese would invade, the British military launched Operation Ironclad in the spring of 1942 and seized the island before either Germany or Japan could. It proved to be the first major amphibious operation of the British military since the ill-fated Dardanelles Campaign against the Ottoman Empire in 1915. And unlike that one, which led to the disastrous Gallipoli invasion, Operation Ironclad was eventually a success.

On May 5, 1941, British land and naval forces invaded the island with the support of the South African Air Force, quickly seizing the key port of Diego Suarez. While it was assumed after the port was taken the rest of the island would be quickly secured. However, the Vichy French forces, which included mostly Malagasy and Senegalese troops under the leadership of Government Armand Leon Annet, stood their ground. This resulted in a drawn-out engagement that cost some two hundred men killed on each side but tied down some ten thousand British troops who were badly needed elsewhere. It is likely those troops would have put up as much of a fight or even a greater one had the Japanese invaded, so Tokyo may have been spared from taking part in a campaign it could have ill afforded.

Instead, it was another sideshow of the war that the Allies were forced into engaging in, with little to actually show for it.