This Nazi Siege Mortar was One of the Largest Ever Built 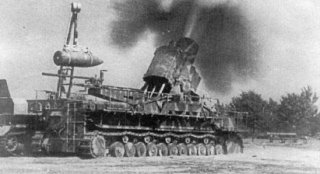 The Karl-Gerät, literally the Karl-Device, was one of Nazi Germany’s largest siege mortars, and one of the biggest mortars ever built. It is difficult to overstate both the Karl-Gerät’s size and power.

The Karl-Gerät is one of, if not the largest siege weapons of World War II, specifically designed to fire immense bunker-busting ammunition that Germany used to tear apart cities in Eastern Europe. However, the Karl-Gerät’s origins actually begin before World War II.

As Germany began its program of secret military rearmament in the mid-1930s, one of the principal obstacles the German military command anticipated was the mighty Maginot Line. The French built the Line, a long series of concrete bunkers, anti-tank and anti-infantry obstacles and reinforced pillboxes, along the country’s eastern border with Germany in order to deter or defeat a German assault on France.

Thousands of elite French troops manned the heavy guns implanted into the Maginot Line. Popular opinion regarded the long line of fortresses virtually impregnable: a frontal assault against the dug-in position would have been incredibly difficult, if not downright impossible. In order to take on the line and give German soldiers a fighting chance the German Army needed a massive siege gun that could penetrate even the thickest of the line’s concrete bunkers: the Karl-Gerät.

The German arms company Rheinmetall designed the Karl-Gerät around a nearly 24-inch shell that weighed almost 5,000 pounds and was specifically designed to punch through over eight feet of concrete and detonate once it came to rest inside the bellies of French defenses.

A video of the Karl-Gerät in action can be seen here and is worth the watch. In the grainy black and white video, the Karl-Gerät’s massive recoil as well as the immense cloud of dust the siege device generates are immediately impressive. A view of inside the breech gives a sense as to the Karl-Gerät's immense shell size.

Ultimately Rheinmetall built a total of seven Karl-Geräts. Each was in essence a custom build with different engines, transmissions, and differing number of road wheels. Top speed and range subsequently differed between the 7, though range likely never exceeded a scant 60 kilometers, and top speed was likely 10 kilometers per hour at best.

Though the massive vehicle — which tipped the scales at about 125 tons — traveled on tracks similar to a tank, normally an even larger specially designed train transporter moved the Karl-Geräts as close to their destination as possible, then dismounted the massive siege vehicle which then traveled under its own power. In order to make the going as easy for the vehicle as possible, the large vehicle’s approach would be leveled and packed beforehand — if the Karl-Gerät threw a track, replacing it would be incredibly time-intensive given the massive mortar’s large size.

Ultimately Nazi Germany bypassed the massive Maginot Line by attacking to the Line’s north through the Low Countries, though Germany employed the Karl-Gerät on the Eastern Front. In that theater of combat, the German Wehrmacht employed Karl-Geräts against several cities and fortresses, including Sevastopol, against Polish resistance fighters during the Warsaw Uprising in 1944, as well as Germany’s last-ditch attempt to slow down American forces fighting towards Berlin in western Germany.

Despite their massive size, the fate of all seven Karl-Geräts after the war is not definitely known, though one example is currently on display at the Kublinka Tank Museum in Russia.