The Nazis Called This German Vehicle the ‘Bumblebee’ 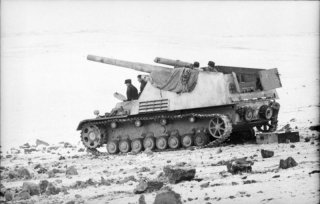 Nazi Germany’s myriad armored vehicles are considered to be some of the best designs of World War II, several of which were quite innovative. Along with many tanks, Germany pioneered the use of self-propelled artillery guns.

Building on lessons learned from the Geschützwagen, a semi-experimental German self-propelled gun that saw German artillery pieces mated to the hulls of British light tanks, the Hummel design was not only much larger but also packed a much more powerful main gun.

The Hummel (German for Bumblebee) borrowed elements from previous German armored vehicles, including the Panzer IV engine and suspension system, as well as the Panzer III’s steering apparatus to create a new chassis of mixed and matched components.

The Hummel differed from the previous Geschützwagen from the outset. Whereas the smaller, more improvised Geschützwagen served in a dedicated fast-response and mobile artillery role in support of infantry operations, the Hummel acted instead in support of German tank formations, a role the self-propelled gun’s armor package and large main gun were well suited for.

The large platform’s main gun was, in a word, impressive. The Hummel sported an enormous fifteen-centimeter heavy howitzer, a field piece that was one of Nazi Germany’s most important field guns used in support of large field maneuvers and counter-battery fire. The large cannon could hurl massive, ninety-five-plus-pound artillery shells over eight miles—a range that expanded to over twelve miles with the use of rocket-assisted projectiles.

Although the fifteen-centimeter sFH 18, as the howitzer was known, was indeed a massively powerful field gun, one of its drawbacks was its high six-plus-ton weight, which made traversing the austere landscape of Eastern Europe less than fast. In particular, Russia’s Rasputitsa weather phenomena in which waterlogged soil becomes so muddy, the passage becomes incredibly slow and problematic, especially for heavy platforms like the fifteen-centimeter heavy gun.

The Hummel mounted its large fifteen-centimeter gun atop the chassis, protected by steel armor sides that, while adequate against a variety of small arms, would have been completely ineffective against larger-caliber munitions. The armoring surrounding the gun was open-topped and had a small double door at the rear for egress.

One of Hummel’s drawbacks was the relatively scant amount of ammunition it carried. This necessitated building a number of Hummels in parallel that served as ammunition carriers to keep their brethren supplied with ammunition. Though the ammunition carrier Hummels did not carry a main gun, they could be outfitted with one with a minimal amount of tooling.

The Hummel served in support of German tanks during the Battle of Kursk, the largest tank battle in history. Postwar, several Hummels were given to various nations, including to Syria and Romania. Today, only six examples still exist in various tank and armor museums in Europe, the United States, and further abroad.