The Nazis Ordered Their U-Boats to Fight Airplanes. It Was a Massive Mistake. 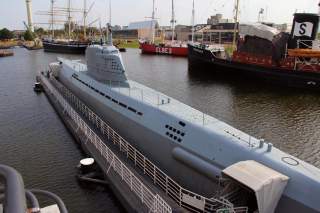 At the height of the World War II Battle of the Atlantic, Grand Adm. Karl Dönitz, mastermind of the Nazi U-Boat fleet, issued Standing War Order 483 in defiance of conventional wisdom. The “Fight Back Order” instructed German submarines transiting from French bases through the Bay of Biscay to fight off attacking aircraft on the surface rather than evade with a hasty crash dive.

This order came about because the submarines were pitted against British and American anti-submarine planes in an unprecedented arms race—one the deadly U-Boat fleet was losing.

Patrol planes had played a role in searching for and destroying submarines since World War I. However, in World War II the Nazi U-Boat fleet suffered a few losses to air attack between 1939–41. Things changed dramatically with the British development of aircraft-mounted ASV surface-search radars.

The U-Boat wolf packs were suffering heavy losses by late 1942—but briefly technology came to their rescue with the introduction of the Metox Radar Warning Receiver, which beeped when it detected an approaching radar. Then in March 1943, the Kriegsmarine revised the Enigma encryption system it used to communicate with U-Boats, which the Allies had hacked. In March 1943, U-Boats sank 120 ships for ten losses.

However, in the spring of 1943 Allied aircraft began sporting new centimetric surface-search radars that did not set off Metox. A final key advancement was a decision by President Roosevelt to deploy long-range B-24 Liberator maritime patrol planes to the Battle of the Atlantic that could give convoys air cover even over the dreaded “mid-Atlantic Gap.” These were supplemented by small escort- and merchant aircraft carriers.

In April 1943, U-Boat losses skyrocketed to disastrous levels, prompting Dönitz’s order. But why would he deliberately pit his submarines against the bombers? After all, the patrol planes wanted the submarines to remain surfaced so they could be engaged and destroyed.

However, there was a certain logic to Dönitz’s directive. Short-range, rapid-fire flak guns were one of the most cost-effective weapons of World War II. These reliably inflicted heavy losses against armored dive bombers and fast-moving fighter-bombers—and would continue to do so even against hi-tech jets during the Vietnam War.

Maritime patrol planes were the perfect target: mostly huge, relatively slow aircraft typically derived from high-altitude bombers that would ordinarily never fly low enough to be hit by short-range flak. Worse, anti-submarine planes had to fly low and slow over their targets to accurately pickle their depth charges, and would often circle around multiple times—making them an easy target.

But there was a problem—large aircraft could take a lot of a punishment. The heavy machine guns or the twenty-millimeter cannon installed on the rear platform of a U-Boat’s conning tower—the “Wintergarten”—simply weren’t punch enough.

The Kriegsmarine’s solution was more guns and bigger ones. Twin twenty-millimeter gun mounts were already becoming standard U-Boat armaments in 1942, but submarines additionally received quadruple Flakvierling mounts with a gun shield. Even more effective were thirty-seven-millimeter guns. Though these had a slower rate of fire of eighty rounds a minute, each shell individually weighed five times as much and was more likely to inflict critical damage.

Armament was never entirely standardized, but late-war U-Boats typically went without their eighty-eight-millimeter deck guns to save weight for one thirty-seven-millimeter or flakvierling gun, and two dual twenty-millimeter cannons.

The Kriegsmarine went even further by converting four Type VIIC submarines (U-441, U-256, U-621 and U-953) into U-Flakeboote specifically assigned to hunt down aircraft! These were loaded down with two quad Flakvierling cannons and one or two thirty-seven-millimeter guns, while their torpedo load was reduced to just five. The idea was to lure unsuspecting ASW aircraft towards these “flak traps” and destroy them. The flakboote even carried rocket-propelled-cables to entangle aircraft, though this concept didn’t prove viable.

Between May and October 1943 U-Flaks were dispatched on seven patrols. These escorted groups of U-Boats told to remain surfaced in the Bay of Biscay so that the U-Flak could attract trouble to them.

The problem was that even when U-Boats shot down planes, they often sustained heavy damage in return. In May, U-441 was badly damaged in a battle in which she shot down a Sunderland flying boat. On her next patrol, she engaged a flight of three twin-engine Beaufighters from 248 Squadron on July 12, which repeatedly strafed her deck, killing ten crew and wounding twelve—including all of the ship’s officers. The ship’s doctor had to nurse the vessel back to base.

Allied pilots were at first taken aback by the new aggressive tactics—but quickly adapted. If a U-Boat chose to remain surfaced and spit out flak, flyers would circle at a distance until reinforcements arrived to launch a coordinated attack, with their defensive machineguns used to strafe the flak gun crews. ASW planes also made increasing use of three-inch RP-3 anti-submarine rockets which could be fired from a safer distance, unlike depth charges.

In return, aircraft sank twenty-six U-Boats and heavily damaged seventeen. Four-engine bombers were highly expensive—but submarines even more so. A U.S. Navy study concluded each standard Type VII U-Boat cost Nazi Germany $2.25 million dollars—while a four-engine B-24 cost about $297,000 and a twin-engine Catalina seaplane $90,000. Just as importantly, U-Boats had crews of around fifty, while the bombers were manned by five to twelve crew.

Even if the tradeoff had been more even, the Allies had many times the industrial capacity and manpower, and were willing trade-off losses if it prevented the U-Boats from sinking merchant ships full of troops, supplies and heavy weapons that would seize French North Africa in 1942, invade Italy in 1943 and liberate France in 1944. In fact, for every U-Boat sunk, patrol planes harassed or damaged many more, preventing convoy attacks and forcing them to return to base.

The Allies dealt a decisive blow to U-Boat operations in May and June 1943 from which the Kriegsmarine would never recover, though the Battle of the Atlantic would continue for two more years and cost tens of thousands of lives. Dönitz’s rescinded Order 483 in August, and in November canceled refits to convert three more U-Flaks and reverted those deployed to their standard configuration.

Germany introduced improved Naxos radar detectors, snorkels allowing a submarine to take in air while shallowly submerged, and the pioneering Type XXI diesel-electric boat which could sustain high underwater speeds and remain submerged for days. But none of these technologies effectively challenged Allied naval dominance.

By the end of World War II, the Kriegsmarine had lost 678 out of 1154 U-Boats to hostile action. Of these, roughly 250 were lost to aircraft and 264 to surface vessels. Another forty-three were destroyed by air raids at base, and thirty-five were joint ship-aircraft kills.

Today, airliner-sized maritime patrol planes and anti-submarine helicopters remain one of the chief threats to silent-running submarines, but few modern submarines are equipped with anti-aircraft weapons. However, the German Navy still hasn’t entirely given up on having submarines capable of fighting back against airplanes, and is developing a submarine-launched fiber-optic-guided anti-aircraft missile called IDAS for its Type 212 air-independent propulsion submarines.

Meet the Nazis’ Failed Forerunner to the A-10 Warthog