The Nazis Planned to Defeat the UK With Counterfeit Bank Notes 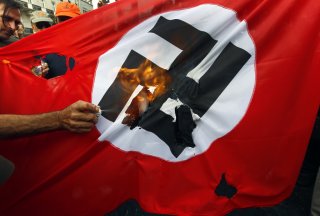 The United States Department of Treasury currently estimates that there are around $70 million counterfeit bills were in circulation, a number that is quickly on the rise. In 2016, $30 million in counterfeit bills was recovered in a joint Peruvian/U.S. operation. It was the largest bust ever. Today, criminals use counterfeit money to fund other criminal activities. During World War II, however, there were efforts by Nazi Germany to ruin Western economies with bogus bills.

Operation Bernhard began in 1939, when the Sicherheitsdienst (SD), the intelligence branch of the SS, was able to successfully duplicate the rag paper used by the British to print its money. Additionally, the SS combed concentration camps and snapped up inmates who showed talents to produce engraving blocks. Ultimately more than 140 individuals were based at Brandenburg’s Sachsenhausen camp, where they began the process of counterfeiting the British currency.

Under the direction of SS Maj. Bernhard Krüger, the team of forgers and counterfeiters created bills that could fool not just small shopkeepers and taxi drivers but could pass through financial institutions undetected. The ambitious goal was to take down the entire British economy.

By the middle of 1942, the team had successfully produced more than eight million notes in denominations of £5, £10, £20 and even £50, to a total “value” of some £132 million. That was greater than the Bank of England even had in its reserve. Also, it was reported to have amounted to some 15 percent of all the notes in circulation during World War II. The Germans concentrated on the largest number of notes in circulation, which was £5.

However, there was a flaw in the plan regarding how to distribute the money. The original thinking was that the money could be dropped from the sky because money falling to earth could cause chaos. Yet, by the time the Germans had produced enough of the banknotes, they no longer had the aircraft available to drop caches of money. Instead, much of the money was used by the Germans for special operations. Many of the bills may have remained in worldwide circulation for years. Today, authentic counterfeit bills from the operation are even sought after by collectors.

One bank official described the quality notes as the most dangerous ever seen, but they did little to impact the outcome of the war as for the war. In fact, in 1943 the Bank of England had stopped releasing all notes over £10.

The Germans did not give up and Krüger even turned his attention to creating counterfeit U.S. dollars. Things had been shaping up when the war came to end. Clearly, some Nazis may have used the caches of money to escape. Meanwhile, some of the Jewish prisoners likely used their skills to create (or had their own stocks of bogus bills), as counterfeit pounds and some dollars were even used to finance their efforts to achieve an independent state in the Middle East. The fact that a Nazi effort was used in such a way is just another strange twist of the story.

As for Krüger, he hid after the war until late 1946 when he handed himself over to the British. As forging an enemy’s currency wasn’t a war crime, he faced no charges. He was detained for a while and then handed over to the French who wanted him to forge passports for their intelligence service. He refused and after being cleared in the denazification process—many of the inmates testified that he helped save their lives—and went to work for a paper company.