Negotiations Over the SALT Deduction Complicate 'Build Back Better' 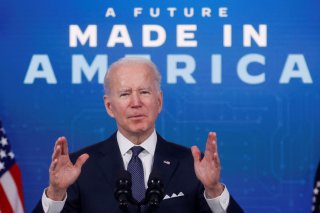 A renewed attempt by the Democrats to pass President Joe Biden’s “Build Back Better” spending bill—which appeared headed for defeat in December after Sen. Joe Manchin (D-WV) indicated he would not vote for it—once again encountered difficulties earlier in the week after several House Democrats threatened to block it unless a popular tax break was expanded.

The tax deduction in question, the State and Local Taxes (SALT) deduction, allows taxpayers to deduct a certain amount of local and state taxes from their federal income taxes. This tax break is particularly useful in states with high income and property tax rates, such as California, New Jersey, and New York, and is also popular in suburban areas with high property values. Notably, suburban areas have become battlegrounds between Republicans and Democrats in national elections.

“We support the president’s agenda, and if there are any efforts that include a change in the tax code, then a SALT fix must be part of it,” wrote Reps. Tom Suozzi (D-NY), Mikie Sherrill (D-NJ), and Josh Gottheimer (D-NJ) in a joint statement released on Thursday. “No SALT, no deal,” the three legislators declared.

Some Republicans have opposed the SALT deduction by arguing that it is a handout to the residents of states with higher property taxes, including traditionally blue states such as California and New Jersey. In 2017, when Republicans controlled both branches of Congress, the SALT deduction cap was lowered to $10,000.

Similarly, some Democrats in Congress—particularly those associated with the party’s progressive wing—have portrayed SALT deductions as handouts to wealthy Americans who already pay the most in state and local taxes.

However, other Republicans have supported the measure on the basis that it lowers overall taxes, a fiscally conservative priority. Several Republicans have joined the House’s unofficial “SALT caucus” to advocate for an expansion to the SALT deduction.

In 2021, the initial version of the Build Back Better bill that the House approved would have raised the SALT deduction cap to $80,000. However, the bill was ultimately not approved in the Senate after Manchin’s dissenting vote, and the cap remains at $10,000. The Biden administration refrained from openly endorsing or chastising the effort to expand the SALT deduction.

“We are in touch with a wide range of lawmakers regarding the president’s economic growth plan for the middle class, and weighed in about SALT late last year, but we won’t negotiate in public,” a White House official said.